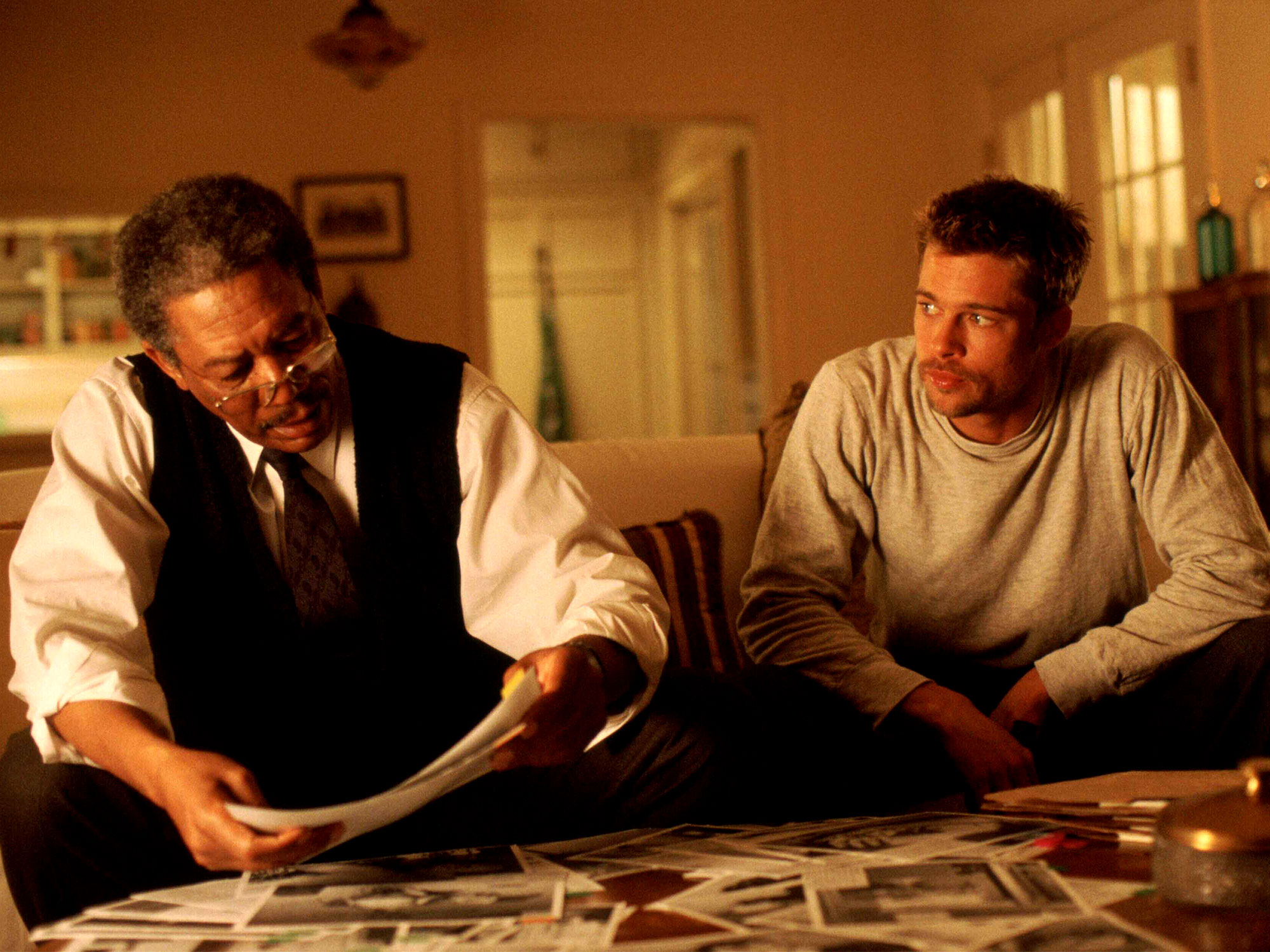 In the penultimate episode of HBO’s Euphoria, Zendaya describes Morgan Freeman in Se7en as the guy who’s “always calmly putting the pieces of the case together while everybody around him is freaking out.” As soon-to-retire homicide detective William Somerset in David Fincher’s acclaimed crime thriller, Freeman tells his young, idealistic new partner David Mills (Brad Pitt) “this isn’t going to have a happy ending.” Having fought for reassignment to the grimy unnamed city – a vague facsimile of New York – Mills dives headfirst into the hunt for a serial killer who is using the Seven Deadly Sins as his modus operandi.

According to Fincher, and screenwriter Andrew Kevin Walker, our culture depicted in Se7en is drifting through darkness. The mouthpiece for Se7en’s bleak outlook is Somerset, whose brilliant, literate mind has become poisoned by despair. Serial killer John Doe (Kevin Spacey) believes he is doing God’s work in torturing and murdering his chosen victims, which ultimately tests the faith and virtue of our optimistic, hot-headed hero, Mills, in people, the job, and himself.

Se7en immediately establishes the world of its dynamic duo and their contrasting personalities. With the sound of the city he’s sworn to protect roaring in the background, the film opens on Somerset alone in his apartment early in the morning. Bare walls, a chessboard and a metronome indicate that this is a man who has dedicated his life to the job and deprived himself of any kind of personal fulfilment or happiness. In contrast, Mills wakes up next to his loving wife Tracy (Gwyneth Paltrow) and, despite unpacked boxes littering their flat, photos and signs of domestic life exist all around them.

Their late night research habits illustrate their respective age and experience. Somerset heads to the library to study Chaucer and Dante as he listens to Bach – centuries of literary history surround him as he attempts to understand the depravities of humanity while taking notes. Mills on the other hand agonises over crime scene photos in his cramped apartment as the TV plays and Tracy frets in the next room. The next morning he purchases Dante CliffsNotes, which he never uses, instead opting for the abridged version from Somerset himself.

In spite of a five-year career as a homicide detective, Mills is still a rookie in Somerset’s eyes, yet to unearth the seedy underbelly of the city for himself. Their approaches to the case couldn’t be more different. As per Zendaya’s observation, Somerset calmly puts the pieces together; he’s an intellectual, refined gentleman who believes the case won’t be solved by force alone. It will require critical thinking, wisdom and experience that Mills sorely lacks. This isn’t to say Mills isn’t a good detective; he’s smart but perhaps a little cocky. His sole focus on the crime scene photos impedes his abilities and Somerset is right to instead consider the motivations of the perpetrator.

In a pivotal scene, Mills and Somerset drown their sorrows in a bar after their (unknowing) first brush with Doe. “How did you get like this?” a curious Mills asks, as Gloria Lynne’s ‘Speaking of Happiness’ plays ironically in the background. “It wasn’t one thing I’ll tell you that,” Somerset woefully replies, hinting that the job is destined to wear down even the best of them over time. Their pursuit of Doe – a man who believes people must be hit with a sledgehammer for them to listen – elicits an internal examination of Somerset and his dim worldview. When Somerset expresses his hatred towards people’s apathy (not unlike Doe) Mills criticises his stance, arguing that he’s desperately trying to believe what he’s saying because he’s retiring, not the other way around.

Mills represents hope and morality and, upon first meeting, Somerset’s perspective on life is steadfast, whereas Mills has yet to be hardened by the city. Doe seeks to change the world, Mills wants to save it, and Somerset just wants to get the hell out of the way. As the drinks dry up, Somerset realises that Mills is truly a good person, who needs to believe that there is good worth fighting for in such an ugly world. Somerset has been consumed by his own pessimism to the point that he’s almost stunned that someone like Mills could exist.

It is Tracy who intrinsically links the two men. After inviting the unmarried Somerset over for dinner, she thaws the icy bridge between them and befriends her husband’s new colleague. The dinner humanises them both and is the only time in the film that they are relaxed and happy together away from the case. It is through Tracy that we learn most about these reticent cops, witnessing them at their most personal and intimate.

Days after the dinner, Tracy meets Somerset and reveals that she’s pregnant but afraid of raising children in the city. Somerset confesses that once, long ago, he too had a pregnant partner, but pressured her to get an abortion. Although he’s sure he made the right choice, not a day goes by where he doesn’t think about what might have been. Somerset views Tracy and Mills as the life he might have had had he acted differently. This ultimately culminates in tragedy, not only for Mills due to the loss of his wife and unborn child, but for Somerset as well, whose second chance is, quite literally, butchered in front of him.

Paltrow brings warmth and humanity to a film where when it rains, it pours; the impact of the infamous ending is as deeply felt as her emotional ties to both men. Somerset and Doe have similar viewpoints but follow very different paths towards escape. Mills is a good man fighting for justice, the cruel twist being his corruption in the end. The only murder we witness on-screen is Mills killing Doe – the final sin of the latter’s “masterpiece”. In a film about retribution, Somerset’s failure to save Mills from the clutches of evil is perhaps the biggest tragedy.

In the end, Mills’ future is undetermined – but hope blossoms for Somerset. As his shattered partner is driven away, Somerset utters his final thematic statement over the rising sun, “Ernest Hemingway once wrote, ‘The world is a fine place and worth fighting for.’ I agree with the second part.” But do we?