The only time my teeth get a proper floss is at my annual cleanings. Not because I don’t try—the angles you have to hit make the job somewhat impossible, so I probably miss 30 percent of my teeth. Floss picks make hitting those hard-to-reach spots much easier than dealing with a piece of floss wrapped around your fingers, but they produce a ton of plastic waste. The Quip Refillable Floss Pick ($25) is here to fix that. Timothy Chase, DMD, a New York-based cosmetic dentist and practicing partner of SmilesNY, says flossing should be a regular part of your routine.

“Everyone should floss at least once a day,” says Dr. Chase. “If you don’t, you leave food particles between the teeth and under the gums that can cause cavities, gum disease, and bad breath.” 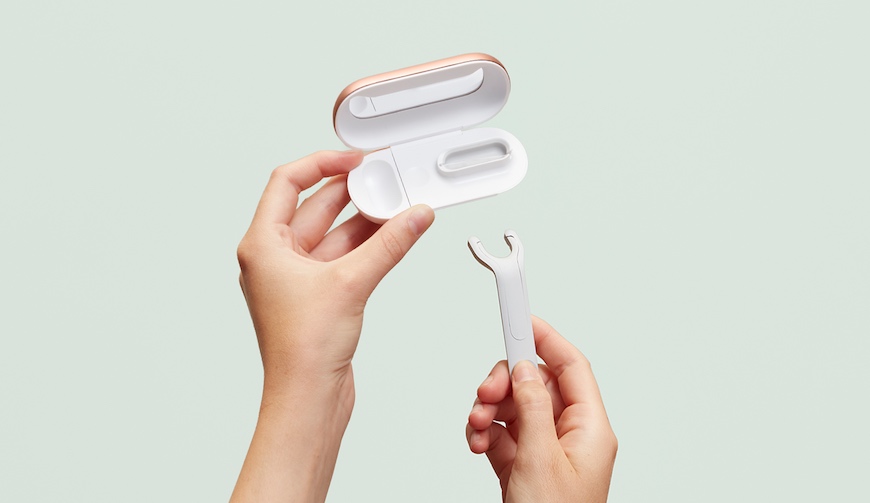 This handy little tool is everything my sustainable dreams are made of. To start—the carrying case is incredibly sleek. It’s available in silver, slate, gold, or copper metal ($25) and white plastic ($15), and houses the pick, the floss, and a mirror. It actually looks cute out on the bathroom counter. Each floss refill pack ($5) lasts for three months (based on someone who flosses twice daily) and is made of 100 percent recycled paper.

Most importantly, it’s incredibly easy to use. To fill the pick, you simply press a button towards the end of the stick to pop it open, place the opening around the floss, close the pick until you hear a click, and then rip. Instantly, you have the perfect tool for flossing. The brand recommends restringing the pick at least once per flossing session.

The EPA reports that in 2017, 5,920,000 pounds of plastic were sent to landfills. Unsure how much of that was related to floss picks, but, making this switch will help at least a little bit. Each refill pod saves the equivalent of 180 single-use floss picks. And since you’re only using enough floss to fit on the pick instead of enough to wrap around your fingers, you’re using way less floss. If you aren’t ready to part with traditional floss for good, Quip also has an equally chic floss dispenser that prevents you from using too much floss.

Once you’ve got your pick, make sure you’re flossing correctly.

“The biggest mistake people make is that they don’t floss. And if they do, they don’t floss correctly,” says New York City-based cosmetic dentist Marc Lowenberg, DDS.“You should always run the floss along with the tooth structure in the shape of a C rather than just snapping quickly between each tooth.”

And while flossing once a day should be your minimum goal, Edmund R Hewlett, DDS, a professor at the University of California, Los Angeles School of Dentistry, says the healthiest mouths belong to those who floss after every meal.

“Most of the bacteria that causes tooth decay and gum disease lives in ‘hard to get to’ areas between the teeth,” says Dr. Hewlett. “The only way to physically remove this plaque from between the teeth is to floss. If I were to give anyone three tips on oral hygiene, it would be, floss, floss, and floss.”