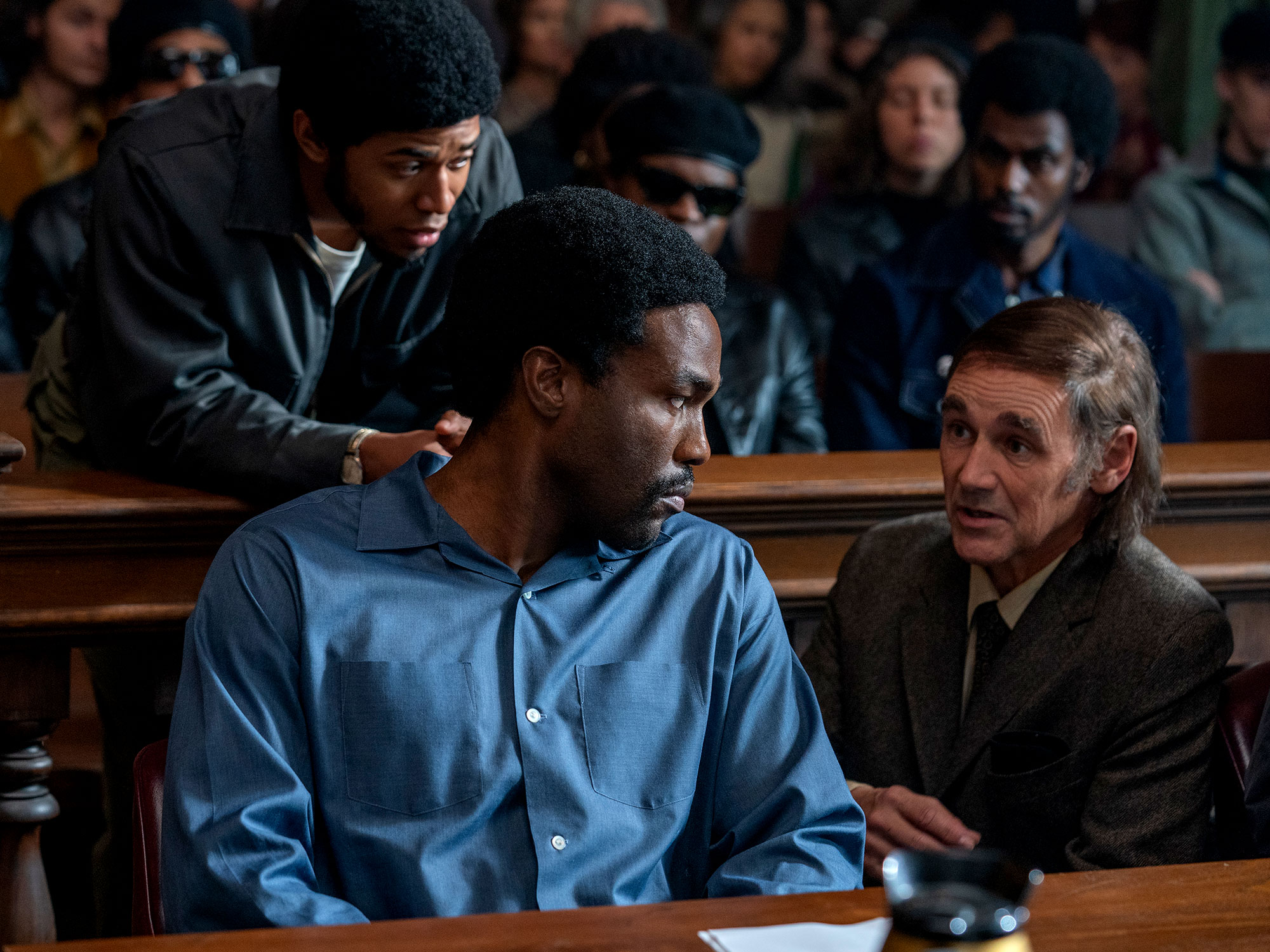 The spirit of revolution is in the air as a bloodthirsty squadron of militarised cops face off against a marching coalition of leftist factions that can’t always see eye to eye about praxis and policy.

This is 1968, and of course, an approximate summation of the now. Aaron Sorkin’s The Trial of the Chicago 7 blazes out of the gate with a quick-cut prologue that subtextually connects the hectic events of America’s most turbulent year (the MLK and Bobby Kennedy assassinations, the ramping-up of anti-Vietnam sentiments, a riot at the Democratic National Convention) to the conflicts mirrored in our present. It’s hard to tell whether it’s all timely or timeless, or whether those might be the same thing.

Either way, that’s just the opening salvo in Sorkin’s wider project of commentary: resolving the great quandary of how best to effect change in the face of internecine ideological disputes among progressives. Fortunately, as ever, his chief strength lies in his ability to enliven what sounds dry on paper. The brisk opening sequence establishes the energy level that he’ll sustain for the coming two-plus hours of courtroom crosstalk, a static proceeding rendered kinetic and thrilling by Sorkin’s signature Tommy gun-dialogue more so than his unadorned, plain direction.

The script is intermittently funny, giving burnout Jerry Rubin (Jeremy Strong) some wonderful business with an egg, and the rest gets delivered with fire and vim. Somehow, the gross miscarriage of justice against innocent men has been made into a cracking good time. 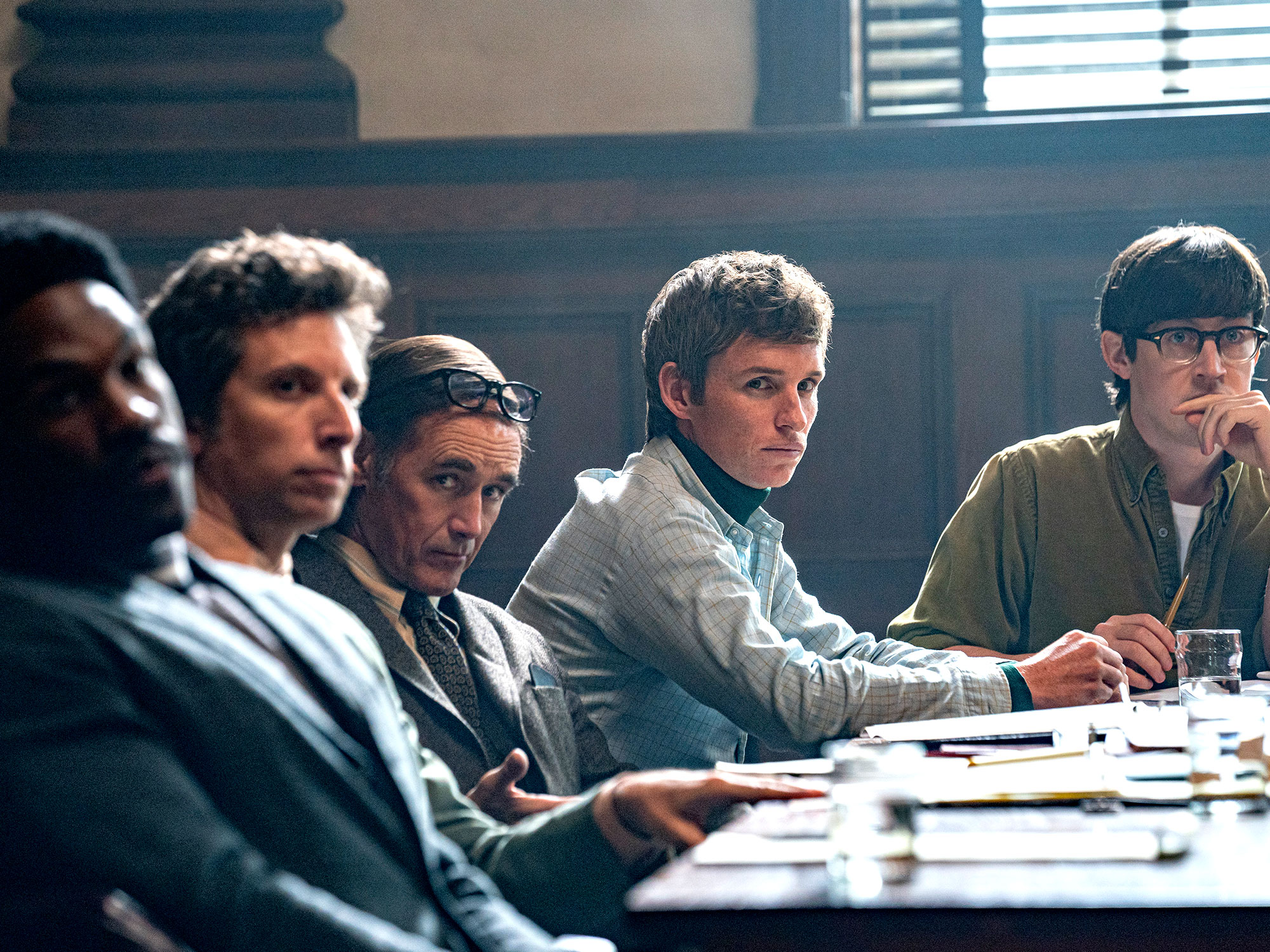 The first minutes also introduce Sorkin’s ambition to gather under one big tent the compromising pragmatists, represented by Eddie Redmayne as the strait-laced activist Tom Hayden, and the radical idealists, led by Sacha Baron Cohen as hippie provocateur Abbie Hoffman. While generously entertaining from minute to minute, the film pays enough lip service to both sides of this mini-schism that neither gets a compelling reason to budge. The far-left types need to be realistic, and the moderates need to stick to their principles; real life has not quite borne out this equivalency.

Though those two men differed wildly in their methods, they shared a goal of peace, and so they were lumped in with six other rabble-rousers and sent to sit before the vindictive reactionary Judge Julius Hoffman (Frank Langella) and answer for the chaos at the DNC. We are constantly reminded that “the world is watching,” as the trial balloons into a referendum on the right to protest. Through an assortment of mouthpieces – the mischarged Black Panther leader Bobby Seale (Yahya Abdul-Mateen II), the fellows’ lawyer William Kunstler (Mark Rylance), Abbie and Tom – Sorkin makes his case for productive disobedience, and an often compelling one it is.

And yet this message gets somewhat diminished, as does the excitement of this high-wire judicial process, by the Sorkinian fondness for liberal congratulation. Bobby Seale gets little to do aside from demand the lawyer he deserves and model heinous suffering in one shocking scene. But the white lawyers get a round-of-applause moment when they valiantly call out the judge’s racism, and the triumphant finale goes to Tom when he uses his closing statement to pay homage to soldiers fallen during the span of the trial.

The swells of orchestral music notify us how much what they’re doing matters, and tacitly places Sorkin in line with their efforts. It’s as bothersome as any of Sorkin’s other bad habits, such as his continued inability to write female characters, but it’s contained to a slim section of the drama.

Hoffman and Rubin, grandstanding pranksters they are, understand that spectacle can be a handy vessel for politics. Sorkin attempts the same, and while he’s in a league of his own on the first part of the equation, he’s still blinkered and selective about the second. His most urgent statement boils down to “can’t we all just get along?” At this point, there’s no use for that anymore.

The post The Trial of the Chicago 7 appeared first on Little White Lies.