Adaptogens have earned their rep as one of the buzziest wellness topics of the past decade thanks to their long list of reported benefits. But besides knowing they’re generally good for you, do you really have a grasp on how they can help? (It’s okay if you don’t, there’s no quiz at the end.)

Despite their reputation for being slightly confusing (and notoriously hard to pronounce), when it comes to adaptogens for immunity, the science is actually pretty simple: It all comes down to a powerhouse sugar molecule called beta glucan.

“Beta glucan is the topic of over 20,000 scientific articles and has been shown to boost key immune cells in the body,” says Nick Bitz, ND, naturopathic doctor and chief scientific officer at Youtheory®. “In short, beta glucan ‘primes’ or energizes our immune cells so they’re always in a heightened state and ready to respond.”

Beta glucan is naturally found in adaptogenic mushrooms such as cordyceps, turkey tail, and reishi, as well as in oats, seaweed, and baker’s yeast. Since that probably doesn’t sound like the most appetizing oatmeal recipe you’ve ever heard, Dr. Bitz recommends a different method for tapping into beta glucan’s immune-supporting benefits: Youtheory® Immune+ Daily Wellness, which contains vitamins C, D3, and zinc, plus six adaptogenic mushrooms and a proprietary blend of baker’s yeast, Wellmune®.

“In short, beta glucan ‘primes’ or energizes our immune cells so they’re always in a heightened state and ready to respond.”

“If you are able to take small proactive steps every day to strengthen and build-up your immune system, you’re less likely to need short-term reactive measures to overcome immune challenges,” he says.

Besides adding a daily supplement to your routine, there’s a handful of simple steps he suggests taking to support your overall well-being. “Once you have these bases covered, additional immune support can help supercharge your immune system so you stay healthy,” he says. Curious what those are? Keep on reading, and you’ll be able to pass that quiz.

Keep scrolling to learn more about adaptogens and beta glucan for immune support.

*These statements have not been evaluated by the Food and Drug Administration. This product is not intended to diagnose, treat, cure, or prevent any disease. 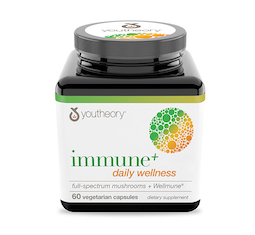