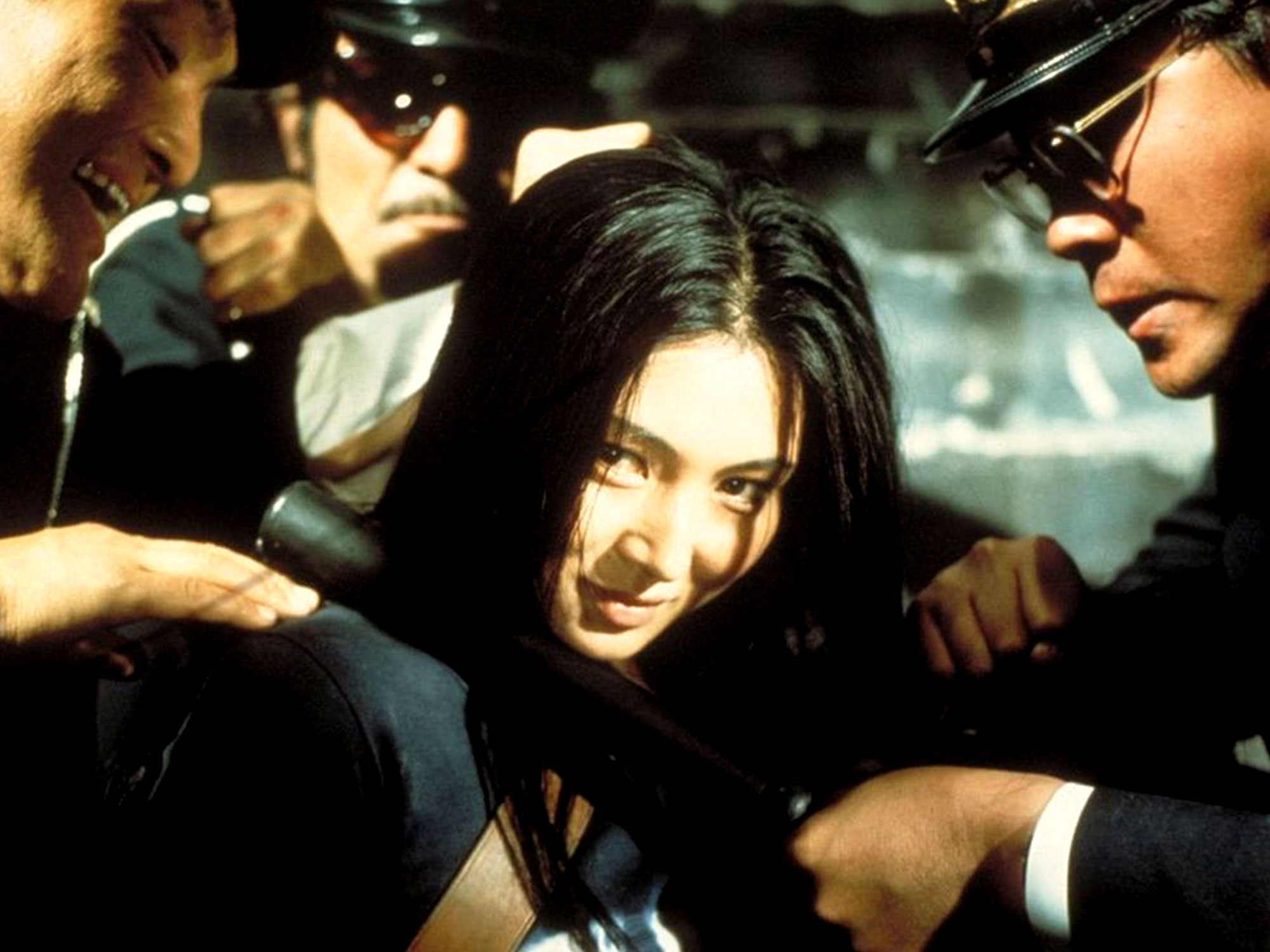 But this was the height of the exploitation era. Studios were reliant on economically-produced franchise films to pry a predominantly male audience away from the lure of home television, and so Toei’s first offer to Kaji was the leading role in Female Prisoner #701: Scorpion, a violent women-in-prison picture rife with nudity and poorly characterised female characters. Allegedly, it was Kaji’s passionate rejection of the role that ended up convincing the studio to rewrite it rather than to seek a replacement.

Kaji portrays Matsu, the titular convict with a sting in her tail. Betrayed by her crooked cop ex-lover Sugimi, and raped by a gang of yakuza, she is imprisoned in an all-female facility and forced to fight for survival after the male prison staff punish the inmates for Matsu’s failed escape attempt.

In one of the film’s first scenes, we’re given a glimpse into what would make Kaji a feminist icon. Tearing through lush green paddy fields while prison guards and attack dogs trail in pursuit, Matsu turns to confront one gun-wielding officer, overpowering him before staring down the rest of his troop in a defiant stand-off. Bound and thrown into solitary confinement, she contemplates revenge with her will intact.

But this dramatic introduction is offset by a preposterous plot point. Matsu and her prison companion Yuki are on the brink of escape until the latter suddenly begins menstruating, forcing the duo to break their stride. This fatal biological flaw of the fairer sex proves to be their undoing; the women are captured and the men resume control.

The film is filled with such absurdities. Women are forced to march around the prison complex in the nude as a form of punishment, while several dialogue scenes inexplicably take place in the communal showers. A queer romance between inmates adds little to the plot other than cheap titillation, while a major prison riot results in the women taking several guards hostage, smothering them with their breasts as a means of torture.

Kaji escapes much of this discrimination through the positioning of her character within the plot. Matsu is an outsider; she is betrayed by her antagonists, preyed upon by the guards and tormented by her fellow inmates. It’s her against the world, and first-time director Shunya Itō makes this explicit through regular allusions to Japanese flag.

A cathartic groin stabbing by Matsu’s hand at the film’s climax aligns the corrupt Sugimi with the national government by having him bleed out red into his white linen trousers. This thinly-veiled critique of the system Itō was working within can be interpreted, too, as a subtext for Kaji’s retaliation against the exploitative nature of the industry.

Aside from this unconventional depth of meaning, Itō also does a great job of elevating the film through vivid colour symbolism and hallucinatory dream sequences, such as in the flashback to Matsu’s first sexual encounter with Sugimi. This pivotal scene, set in a vast blue room full of billowing white sheets, is thereby imbued with a sense of otherworldliness which heightens it’s potency amidst largely set-bound prison confrontations. Another memorable shot finds Matsu laying against a fire-red floor, her hair standing on end, signifying her transformation as she prepares a violent streak of vengeance.

Female Prisoner #701: Scorpion and its three sequels are essential texts in understanding the influence of Meiko Kaji on strong female characters like Princess Leia, Ellen Ripley and Sarah Connor in the years to come. But this exploitative women-in-prison flick, like so many of Kaji’s other films, is best appreciated as a time capsule. Problematic as it may be, the film remains a vital chapter in the history of female action cinema.

The post The Japanese cult classic that paved the way for the modern female action hero appeared first on Little White Lies.