Samsung’s year of phone releases doesn’t seem to be slowing down, with the South Korean brand finally unveiling the much leaked Samsung Galaxy S20 FE.

The ‘FE’ moniker here stands for ‘Fan Edition’ and it feels very much like a cheaper, mid-year update for the brand’s flagship Galaxy S20 – with a bit of the Note 20’s DNA thrown in for good measure. There are some upgrades and features that have been ditched in favour of a more tempting price.

The Samsung Galaxy S20 FE (Fan Edition) will be available from October for £599 (4G, Exynos 990) and £699 for the 5G Snapdragon model. We don’t have confirmed US pricing yet, however we do know the 4G version won’t be coming to the States.

This pricing puts it directly in competition with the OnePlus 8 (and likely OnePlus 8T), Moto Edge and LG Velvet. It’s also a similar price to the iPhone 11, which will likely be replaced by an iPhone 12 very soon.

One of the true highlights of the Galaxy S20 FE is that the UK 5G version comes with the Snapdragon 865 platform, rather than the usual Exynos chipset you’ll find in the high-end Note 20 series and Galaxy S20. 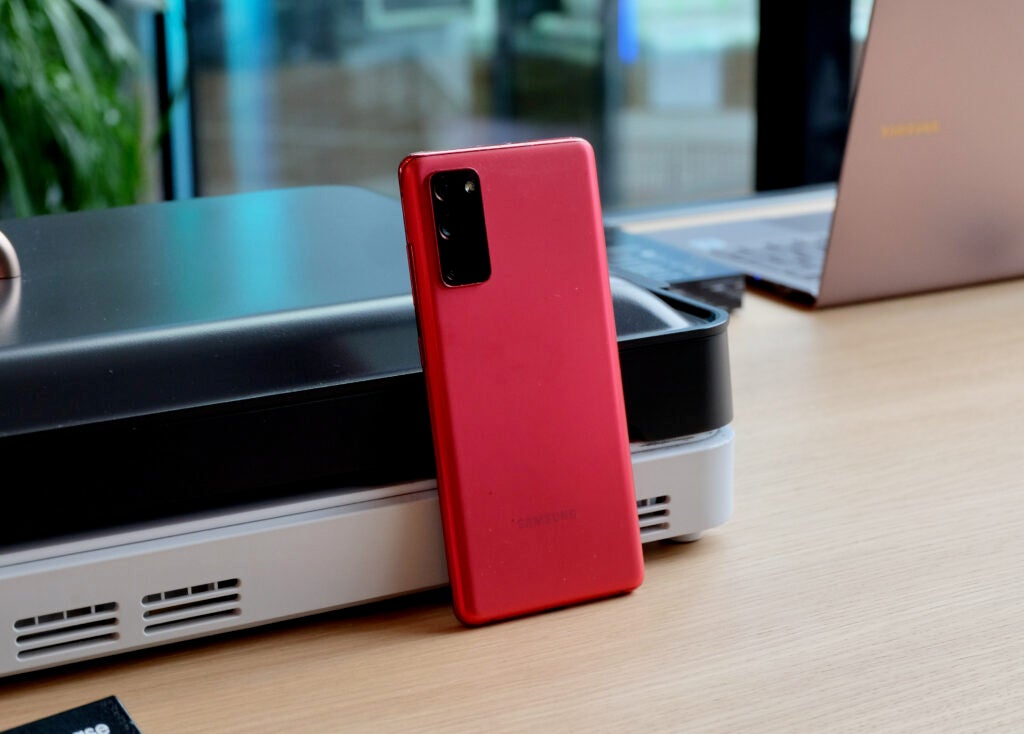 Many have complained about the decreased performance and battery skills of the Exynos version vs the Qualcomm so it’s great to see Samsung deciding to give a wider launch to the arguably superior model.

Now, if you do go for the cheaper 4G version then you will get the Samsung Exynos 990. This variation won’t be available in the States.

Paired with that chipset you’ve got 6GB of fast RAM, 128GB of expandable storage and a healthy 4500mAh battery. I have had issues with the endurance of many Samsung phones this year, so hopefully this large cell (and that Snapdragon chipset) should alleviate some of these issues.

While this is being marketed as a more affordable S20 Plus, it’s good to see Samsung hasn’t skimped on the usual areas. 15w fast wireless charging remains, as does 25w fast wired charging (though you will have to buy the charger separately) and it keeps the IP68 water-resistance rating. It’s got expandable storage too, which is more than can be said for the Note 20.

Samsung is also promising three years of Android updates, and the FE will get Android 11 hopefully sometime soon. 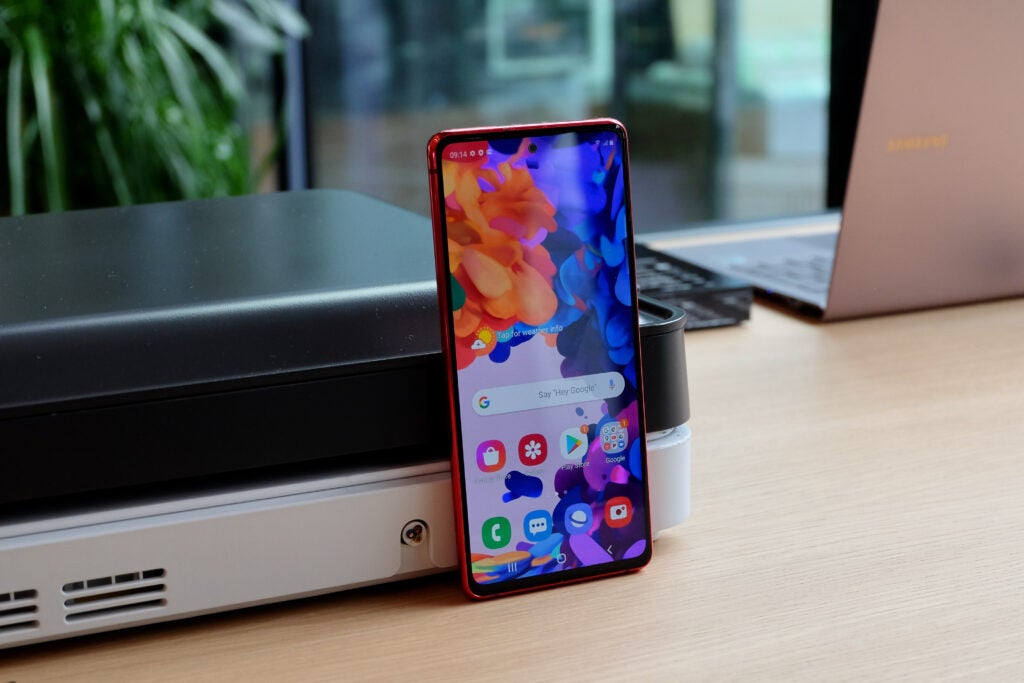 Screen – Flat, with 120Hz refresh and the usual OLED quality

Another welcome feature kept around for the S20 FE is a high-quality 120Hz panel, giving you super-smooth scrolling. It has a 240Hz sampling rate too, so gaming should be responsive. Why Samsung didn’t add this feature to the Note 20 feels bizarre to me.

The FE retains an OLED panel with a small cutout at the top for the front camera, however it tops out at FHD+ rather than WQHD+ like on the Galaxy S20. As you couldn’t combine 120hz and the higher-res anyway, this change seems fine to me. Samsung reps did say the screen isn’t quite as colour accurate as of that on the S20, and it has an optical fingerprint scanner rather than an ultrasonic version.

At 6.5-inches, the FE sits between the smaller S20 and the larger S20 Plus. It feels like a perfect size, though the fact it’s a flat screen makes the phone a tad wider.

Design – A multitude of colours and plastic back

Like the Galaxy Note 20, the S20 FE ditches the glass back for a tough plastic one. I spent some time with the device and I don’t mind the plastic feel, especially on a more affordable phone like this. It has a frosted finish which rids it of picking up fingerprints – always a nice touch. The front remains Gorilla Glass and the sides are constructed from aluminium for a rigid frame.

It comes in a number of nice colours too, including a very on-trend navy blue and a striking red. These are far more interesting hues than you can find the S20 in, and Samsung said they all be available from various networks without the usual exclusivity. 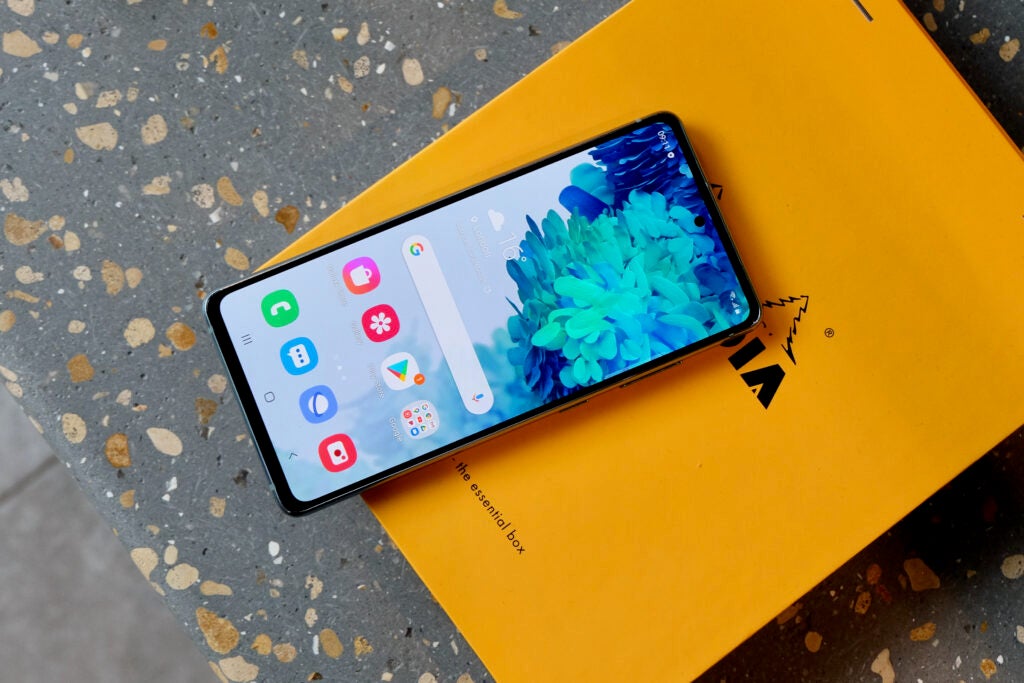 Camera – A lot of inspiration from the S20 and Note 20

On the back of the S20 FE you’ll find three cameras: the same main 12MP dual pixel sensor from the S20, which has an f/1.8 aperture and OIS, along with a 12MP ultra wide and 8MP 3x tele camera with OIS. There’s also a 32MP camera around the front.

Samsung said it has worked to improve the AI processing in the snaps and it has added in a number of filters. One feature lost in the move from the regular S20 is the lack of 8K recording, with 4K being the max here. 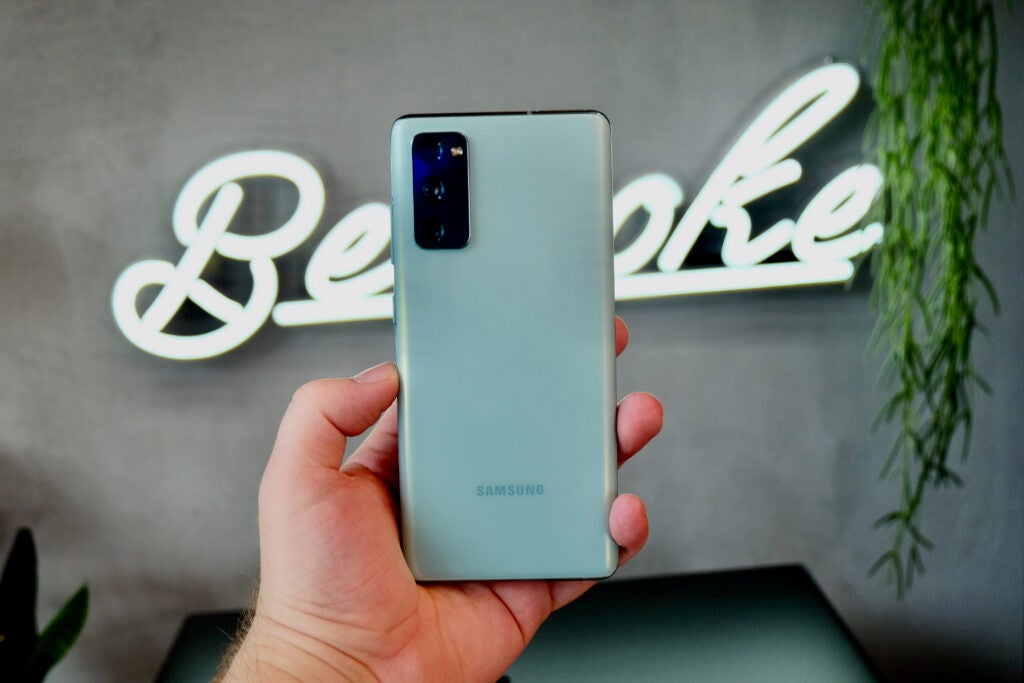 The S20 FE feels more like a Note 20 than an S20, however there are far fewer compromises here than with the S Pen-toting phone.

This isn’t going to go down as Samsung’s most exciting phone of the year but the lower price and nice set of features should make it popular.