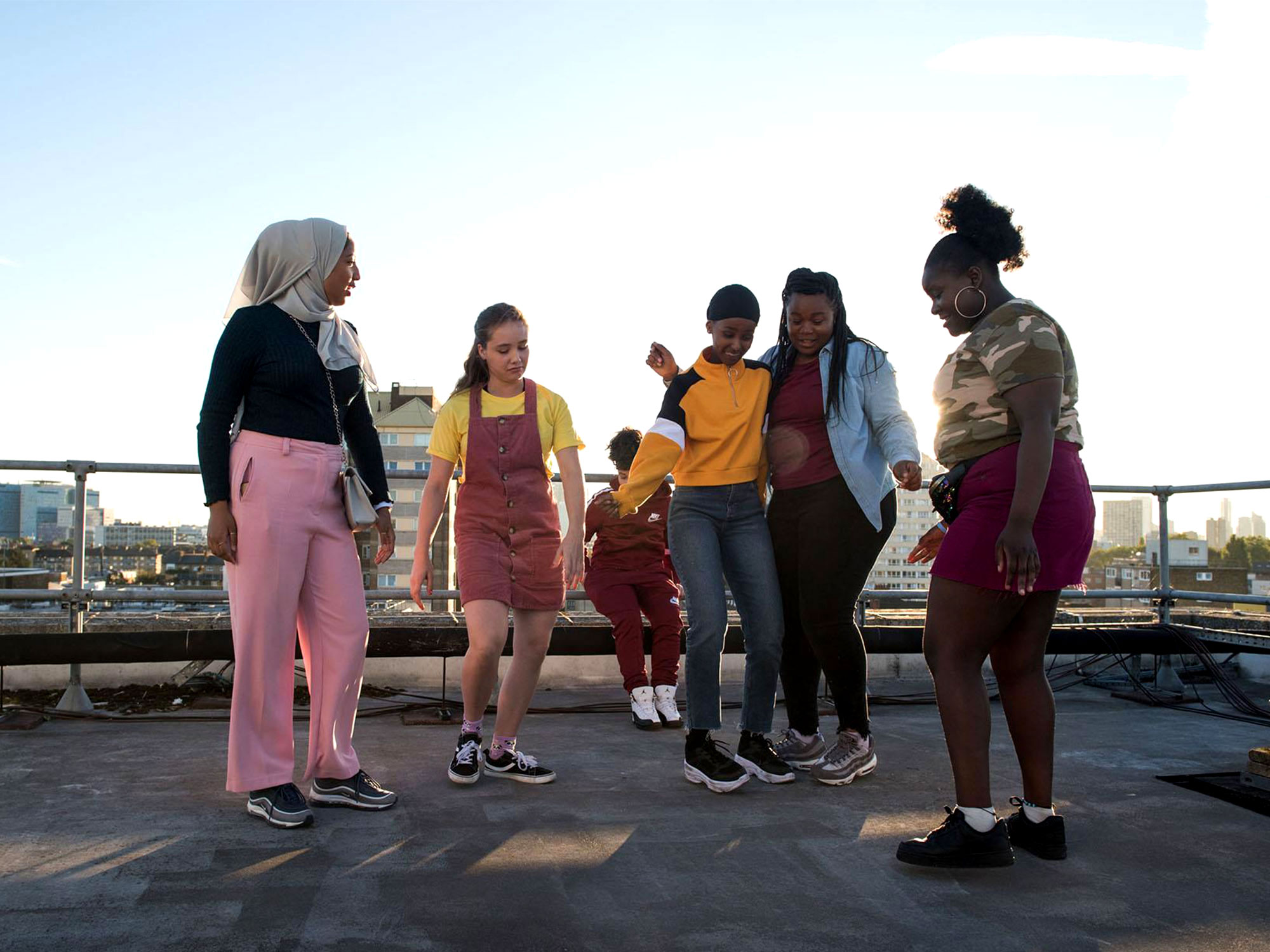 It’s the first day back off summer break and Rocks (Bukky Bakray) comes home from school to a note from her mum saying she needs to clear her head, and to look after her younger brother. Rocks suspected this, querying the special breakfast her mum made that morning – yam and eggs – and asking whether she was alright.

We learn Funke (Layo-Christina Akinlude) has abandoned her children before, and struggles to manage her medication. Director Sarah Gavron and writers Theresa Ikoko and Claire Wilson tell Rocks’ story from the moment she is stripped of parental care and thrust into the role of care-giver, but it’s the unbreakable bonds of teenage friendship that sit at the heart of the story.

Although principally a social-realist drama set in and around in East London, Rocks is fortunately bereft of the miserablism associated with the genre. As Rocks and her seven-year-old brother Emmanuelle (D’angelou Osei Kissiedu) bounce from place to place and avoid social services, their desperate situation is punctuated with more carefree and entertaining scenes at school. They sell individual sweets from a multipack, place bets on who’s buying six wings and chips, teach one another how to use a tampon, and conduct massive food fights in home economics class.

With a cast of first timers grounding the drama, Rocks is both a love letter to community and a nod to Black women who seldom get to be girls. The central group of Rocks , Sumaya (Kosar Ali), Khadija (Tawheda Begum), Yawa (Afi Okaidja), Sabina (Anastasia Dymitrow) and Agnes (Ruby Stokes) speak to one another with the freeness and shorthand that comes naturally from attending an all girl’s school, unrestricted by self-doubt or male attention.

Their only focus is looking out for one another, and it’s delighftul to behold Bakray’s performance – she carries the film on her narrow shoulders. While the character’s circumstances should deny the whimsy of a more typical coming-of-age film, she still allows Rocks’ soft edges to be seen – she displays the full spectrum of Black girlhood beyond resilience. Kosar Ali gives a desperately tender portrayal of loyalty as Sumaya, her funny one-liners only rivalled by mouthy scamp Emmanuelle.

It would be remiss to overlook the potential power dynamics between a white director and her predominantly Black cast. Close-up camera work by Hélène Louvart during a dance scene where Rocks leads the class to ‘Shaku Shaku’, verges on the voyeuristic.

And yet Gavron has used her clout to pull together an inclusive team that goes beyond representational box ticking. She has made a film powered by real empathy and joy. Bakray isn’t a black face in a white story – there is space for cultural nuance. Subtleties in the writing highlight deeper seated cultural issues; such as the kinds of support offered to Rocks by Black teachers versus white ones, and the misguided trust concerned white people place in government bodies, not acknowledging the hostility they often have towards ethnic communities.

Gavron and her team make space for girls like Rocks, instead of hemming them into a stereotype. The film ends as it began: with a black screen and the laughter of teenage girls.