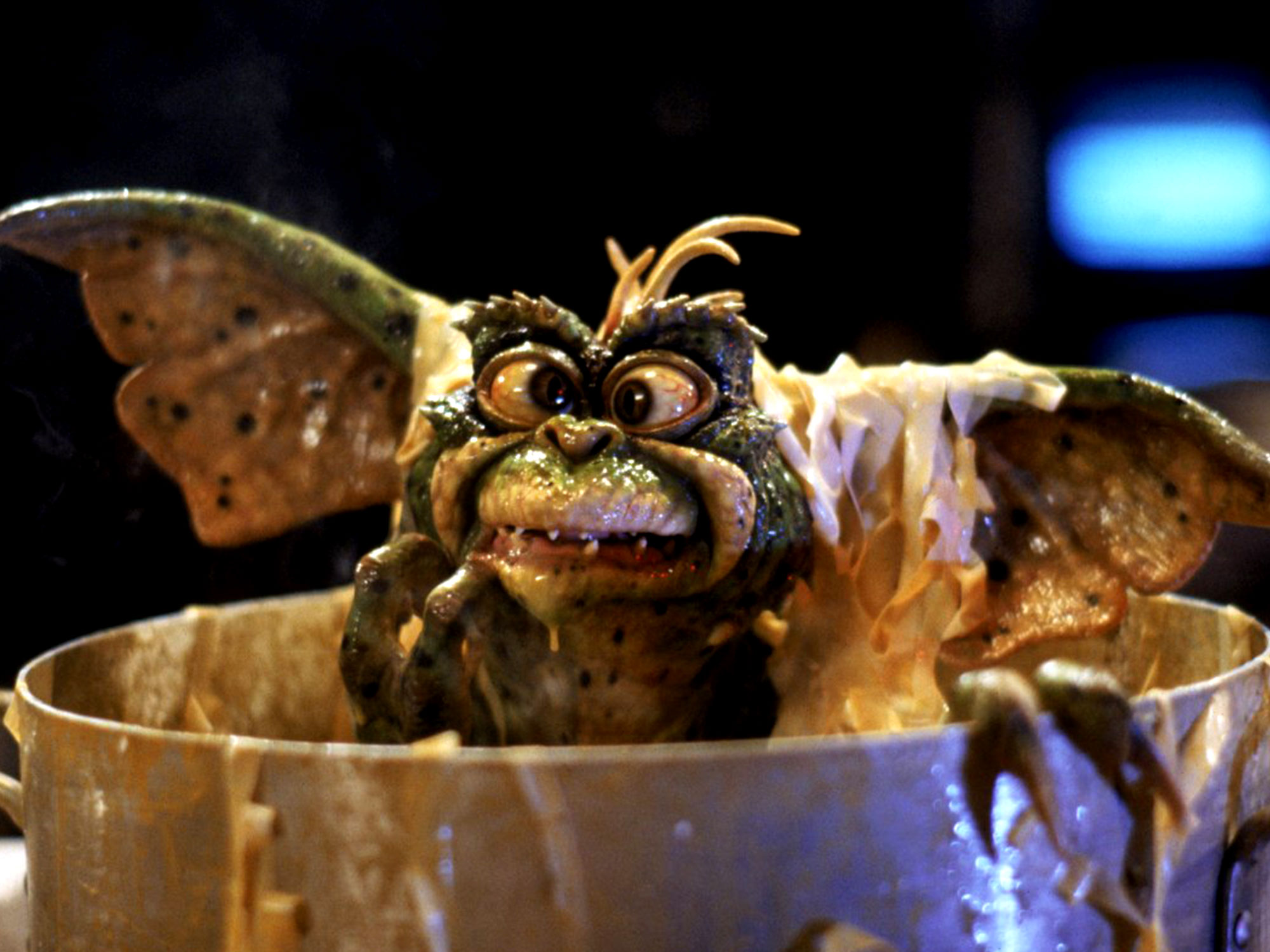 Sometime around early June in the year 1990, the tectonic plates of Hollywood shifted and released some long-dormant energy trapped beneath the Earth’s mantle. It swirled in chaotic flux for a course of days, hanging in the air as it awaited the right moment to manifest itself in some corporeal representation. Then, on 15 June, it seeped into multiplexes and brought about a cosmic confluence of strangeness the likes of which Tinseltown hadn’t seen before and hasn’t seen since.

Two movies, both well-funded studio projects from name-brand talents with vision and the determination to realise it, entered wide release on that fateful day. For that glorious week, multiplexes were a weirder and riskier place to be, thanks to a pair of untethered passion projects from directors refusing to hear the word ‘no’. It’s nothing short of an anomaly, a wrinkle in the fabric of reality, a glitch in the matrix – how else could one day have given us Joe Dante’s Gremlins 2: The New Batch and Warren Beatty’s Dick Tracy in one fell swoop of auteurist mania?

Both films hit that sweet spot in which it feels like the creator has gotten away with something, having appropriated the funds of a massive corporate entity for the unusual, the personal, or the defiantly uncommercial. In terms of style, motivation, influences and communicated ideas, both films stuck out from the cinematic landscape of their moment like sore thumbs. Though with all the behind-the-scenes squabbles between the directors and their executive handlers, the metaphorical extended digit was probably somewhere closer to the middle.

Warren Beatty fought for 15 years to bring the comic strip pulp detective to the big screen, only getting the elusive green light after promising his benefactors at Disney that he’d keep his budget to $25 million and that any overages would come right out of his fee. The price tag ultimately topped out at a bloated $46 million, but luckily for Beatty, enough moviegoers vibed with his throwback pastiche of noir serials to make it a minor hit. 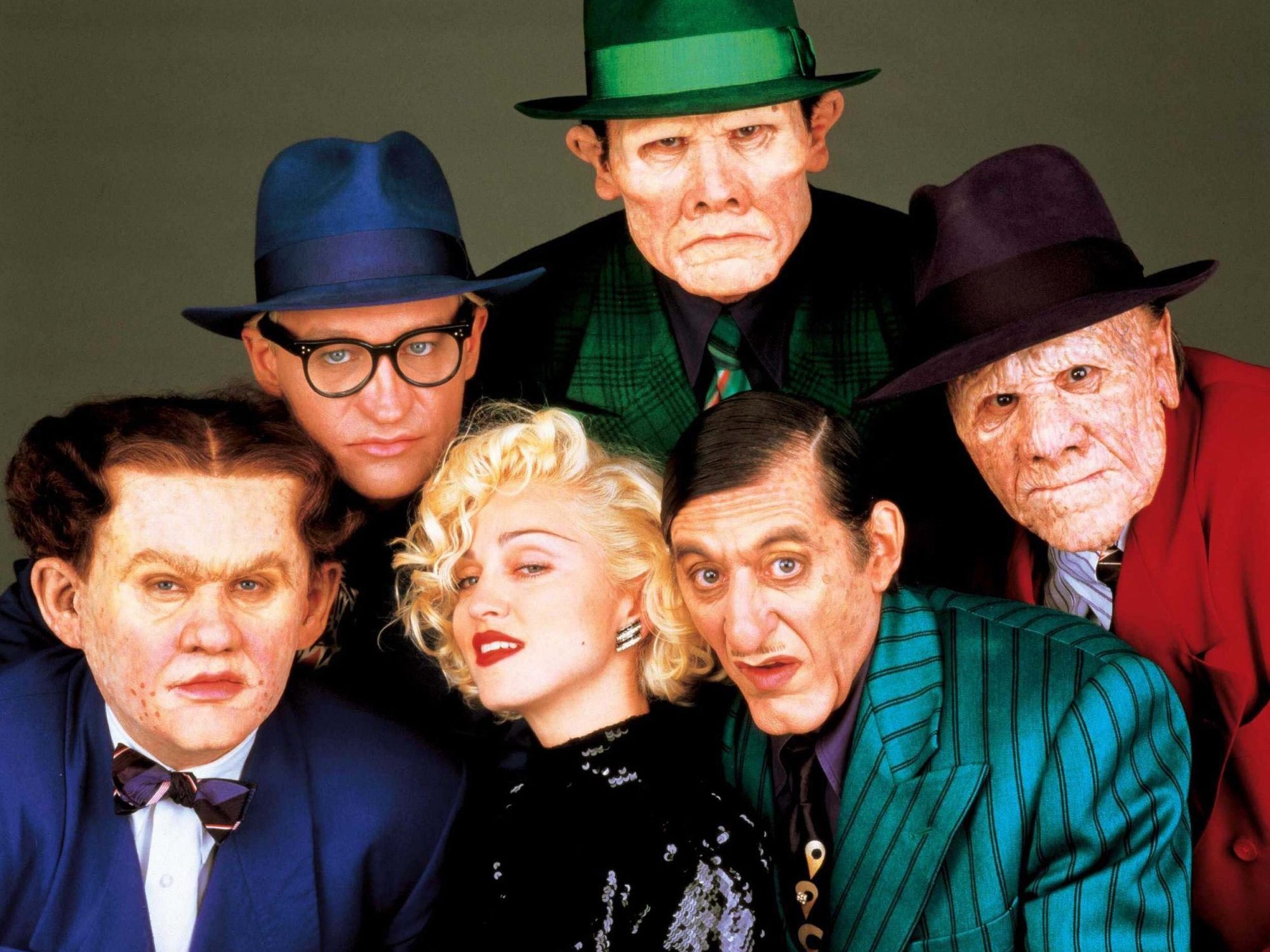 Revisiting the film today, it’s astonishing that a work so idiosyncratic, unfashionable and fitfully bizarre ever got a foothold in the mainstream. More astonishing still is that it was ever assigned a PG rating and marketed to children; the most glaring peculiarity comes from the film’s unnatural marriage of its kiddie entertainment exterior with thoroughly grown-up impressions of sexuality and physical grotesquerie.

The image above says it all, between Madonna’s come-hither stare and the nightmare-haunting visages of Al Capone as “Big Boy” Caprice and his prosthetic-faced goons. No one under the age of, let’s say, 13 should under any circumstances be subjected to the ghoulish abominations approximating the rogues’ gallery that looked slightly less uncanny in the funny pages.

Beyond the dissonances intended or otherwise, Beatty’s work distinguished itself on every other front. Cinematographer Vittorio Storaro went wild with saturated color evoking the lurid look of the original comics, bathing streets in radioactive green or ethereal purple making every frame instantly recognizable.

Stephen Sondheim contributed original songs that Madonna then performed, turning the montages of condensed crime almost jarringly poignant. And there’s Beatty himself as the unstoppable detective and in the director’s chair, seizing this piece of intellectual property and refashioning it as a confessional about his reluctance to commit to a one-woman lifestyle.

It ends with Dick the ladykiller bitterly conceding to commitment, just as long as he won’t be made to actually say the word ‘marriage.’ It’s an indulgent preoccupation the average viewer would expect to find in Competition at the Cannes Film Festival, not in a mass-market would-be blockbuster.

Conversely, Joe Dante didn’t need to do much hoodwinking to make the movie in his head his way. After the fabulous box-office success of Gremlins, Warner Bros approached Dante about getting to work on a sequel right away, but he demurred over doubts that this completed story needed another chapter. The studio then approached a few other writers, all of whom delivered concepts deemed unsatisfactory, which sent the studio crawling back to Dante with a $50 million budget and the much-coveted offer of total creative control. With complete autonomy, he figured he could really do some damage.

His follow-up veered into lunacy with such gleeful vim that Key and Peele premised an entire comedy sketch on imagining how the pitch meeting must have gone. The New Batch does away with the original’s suburban setting, most of the characters, and whatever vague rules of biology to which it may have once adhered. The action moves to midtown Manhattan, into a skyscraper owned by the Donald Trump avatar Daniel Clamp, who employs our returning hero Billy Peltzer (Zach Galligan, transformed into a young adult after six years between installments). One floor houses a genetics lab where Gizmo toddles around and inadvertently spawns mutant offspring with unpredictable characteristics. Bat-Gremlin, Spider-Gremlin, Intelligent-Gremlin, Lady-Gremlin, et al.

All changes play to the newly antic, anarchic sense of humor adopted by the little critters in this installment, a continuation of the Looney Tunes ethic explicitly acknowledged with a fourth-wall-breaking cartoon before the film properly begins. Bugs Bunny and Daffy Duck squabble about who deserves top billing before saying to heck with it and starting the show. Another memorable cameo sees Hulk Hogan appear halfway through the film, after the reel has appeared to burn up, as a theater patron demanding they run the rest of the movie or else suffer a bout of Hulkamania. Dante fosters a zany permissiveness in which anything goes; logic, reason, rationality and the laws of physics have no purchase here.

The two films make for a glorious double feature on this, their joint thirtieth anniversary, as a bipartite fantasy of an industry that could never be. They imagine vivid worlds all their own, but they also imagine a Hollywood where artists have the latitude to chase their more outré whims and answer to fickler muses without compromise to the suits. If we’re lucky, we get one of these in a year – a Jupiter Ascending, a Mad Max: Fury Road, you know the sort. That we ever got two of such exceptional potency, and on a single day, qualifies as nothing short of a miracle.