(This is Part 3 in my series “Covid chronicles.” Click here for the earlier parts.)

I have a neighbor and friend who was an early victim of Covid-19. She did not die, thank God, but (like many other survivors) she has continued to be pole-axed by the sickness for nearly two months. The recovery of nations from the effects of the disease will be considerably more long-drawn-out, and complex. 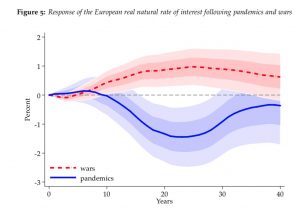 In March, the San Francisco Fed produced a report (PDF here) assessing the longterm economic impact of 15 large pandemic events since the Black Death of 1347-52. It found that the depressing effect these pandemics had on the economies that suffered them lasted for 40 years afterwards–the blue/lilac curve here. (For what it’s worth, wars left a generally positive economic effect from about Y+5 onwards– the pink/red curve.)

Clearly, though, the countries now afflicted with Covid-19 will “recover” at different rates, in different ways, and to differing extents.

On April 14, Gita Gopinath, the super-smart Director of the IMF’s Research Department, issued a sobering edition of the IMF’s World Economic Outlook series predicting that global GDP would shrink in 2020 to 3% below what it was in 2019. This was a dramatic revision to the WEO she released just in January, in which she forecast that world GDP would increase by 6.3% in 2020. 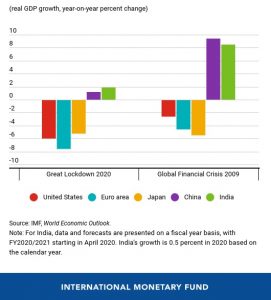 But the contraction Gopinath forecast in April was not evenly spread. In this chart in her blog post, she shows us– in the left half of the image– that she expected the United States’ GDP to shrink by 5.9% in 2020, while China’s would grow by 1.2%. (The precise numbers for these forecasts are here.)

All of us who are living in the United States today are experiencing the near-seize-up of the country’s economy in a very direct way. I walk and drive by shuttered shops and small businesses and by alarmingly large homeless encampments– here in the “capital of the free world”. I have a son-in-law who built, runs, and co-owns two once-bustling restaurant/bars in New York City, the fruit of 15 years of hard work. Now, at just one of them, he’s trying to pull in a little income by doing takeout. But no-one can describe this as a business plan. The “relief” money that the President and Congress have been doling out is miniscule compared to most people’s needs, and very short-term. Meantime, the cockamamie, crony-ridden, and criminally corrupt way the federal government has been responding to the medical aspects of the crisis has ensured that it will continue for several months more, bouncing around the country from place to place. It is quite possible that the next time Dr. Gopinath releases a WEO projection, the outlook for the U.S. economy for 2020 may even worse than it was in mid-April.

There are three key factors that will determine the effectiveness of any country’s ability to bounce back, economically, from the effects of Covid-19 (or of any of the other Covids that may come in its wake…) They are:

As I blogged here, yesterday, the US government’s response to the medical/public-health challenge has been astoundingly poor. A recorded death rate as of yesterday, of 21.78 per 100,000 of population, within just over two months from the first death, is appalling in such a rich country. (Many Covid-19 deaths may not have been recorded as such.) And in the United States, the death toll continues to mount.

In China, by contrast, the death rate was 0.33 per 100,000 and the pandemic was apparently halted in its tracks back in March. This was the result of public health measures judged by many outsiders at the time to be draconian. They included the speedy development, distribution, and, deployment of a test for the virus; a complete lockdown of the sizeable city of Wuhan; widespread restrictions throughout the whole of the rest of the country and especially at its borders; and the mobilization of numerous different layers of cadres for both medical and social-service tasks.

Yesterday, many school students returned to their desks in Wuhan; and CBS was even reporting that Shanghai Disneyland is due to reopen next week.

When governments have been responding to the sharp contraction of economic activity that the various quarantine and lockdown measures have caused, they have made choices between, basically, two different approaches. One ends up giving nearly all the benefits to financial institutions. And this, as NYC-based economist Michael Hudson explained here, can be done in many indirect ways– not just by organizing the whole chaotic “small business support” handout to be directed through the banks, which Trump also did.

The other, fundamentally different approach would be a repeat of what FDR did during the 1930s, in his response to the Great Depression. In his “New Deal” program, it was the federal government that ran nearly all the programs, which had a strong focus on infrastructure upgrades. The federal government did nearly all of the employing in these programs, directly. The role of banks and speculators was minimal.

Yes, the New Deal involved setting up lots of completely new programs from scratch, which took time. Yes, it involved a great increase of the role of the federal government in not just the economy but also American society more broadly… And it worked.

Guess who’s implementing FDR-style policies this time round? No, it is  not Donald Trump. It is Chinese President Xi Jinping. According to this recent article by Eva Dou in the Washington Post, in 2010 the Chinese leaders commissioned economist Liu He to study how the country’s response to the 2008-09 financial crisis had gone. Liu also, it seems, included a study of FDR’s New Deal in the report his team published three years later.

China’s response this year shows that it has taken some lessons from the financial crisis. Beijing flooded the country with cash and cheap credit in 2008, which kept its economy growing but resulted in years of teetering local government debt and skyrocketing housing prices, said Citibank’s chief China economist, Li-gang Liu, who is not related to the vice premier.

This time, China has announced that it will see the crisis through with infrastructure construction, a more stable if slower method of economic stimulus. Xi recently warned that houses were for living, not for speculation.

(Several other aspects of Liu’s report, as described by Dou, are also intriguing.)

Of course,  raw economic performance in terms of GDP does not translate directly into power within the global system. In 2019, the United States’ GDP was counted at $21.2 trillion, and China’s at $14.2 trillion (current US $– and for a population that was four times as big.)