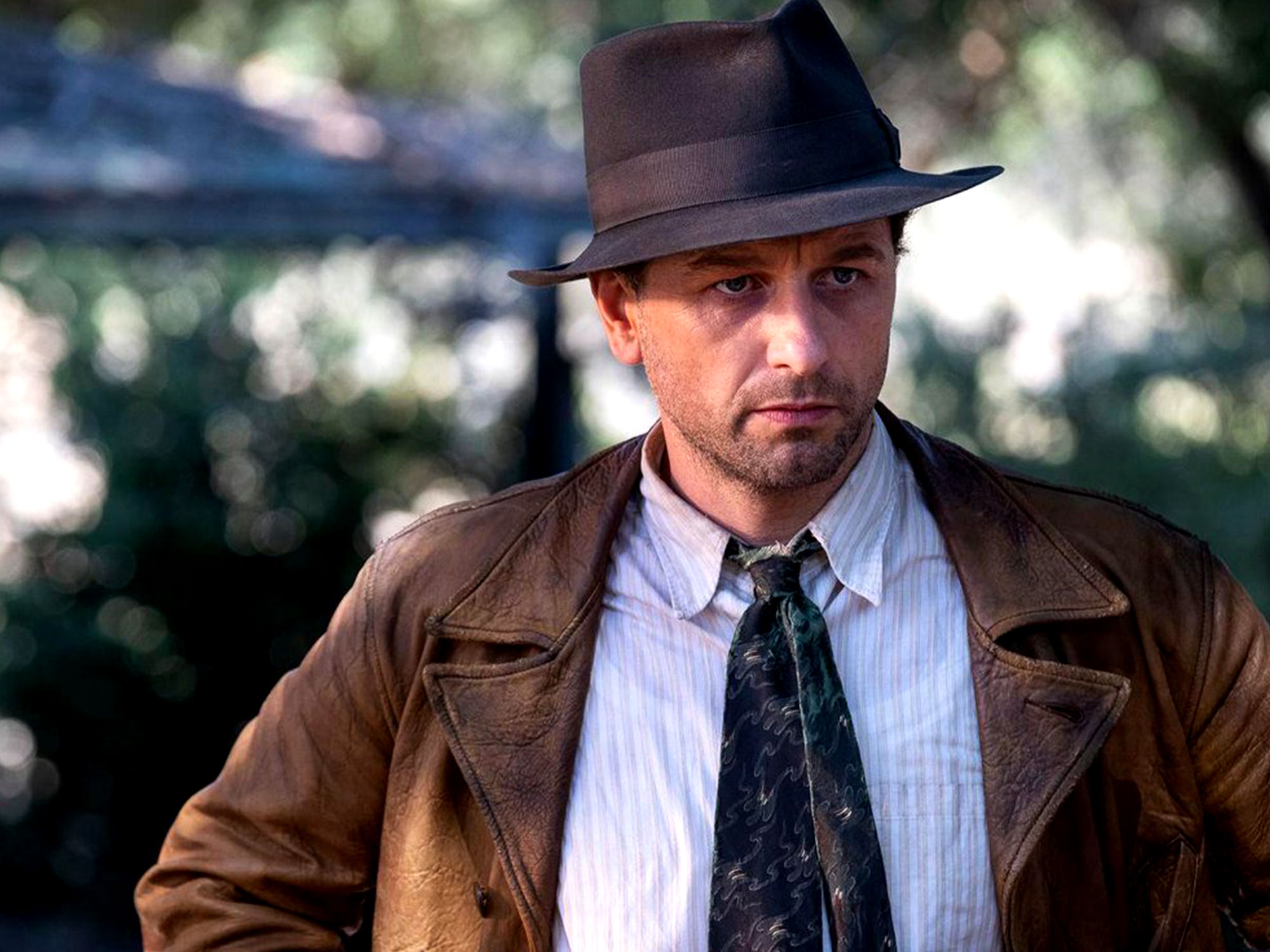 The name Perry Mason is synonymous with a criminal defence lawyer who typically proves his client’s innocence while simultaneously unmasking the real guilty party. Three years after playing the murderer in Alfred Hitchcock’s Rear Window, Raymond Burr signed on to play Mason in the TV adaptation of Erle Stanley Gardner’s hit detective novels.

The initial series ran for 271 episodes over nine years, later followed by a decade of TV movies beginning in the 1980s – Burr spent nearly 40 years playing the titular role. A gritty origin story, in which Mason is a PI rather than a lawyer might not match up with the Burr image, however, the new HBO take on an iconic character intends to make this distinction clear.

Set in Los Angeles in 1932, the economy is in crisis, cops are corrupt, and a child kidnapping-gone-wrong dominates the front page – there is a timeliness to aspects of the narrative. Perry Mason (Matthew Rhys) is a world-weary investigator who makes a quick buck from movie studio bosses wanting to control their roster of talent via the threat of scandal – you might not look at dessert in the same way after the first episode.

Divorced and disconnected, he is a World War One veteran who is still haunted by what he saw in battle. Prohibition is still in effect, not that Perry pays much attention to the boundaries set by the law. When he is tasked with uncovering who is behind the headline-grabbing disturbing crime, the pulpy aspects of this story kick into gear.

Group dynamics are quickly established in the first two episodes with Emmy Award-winning Rhys leading the way – originally Robert Downey Jr was set to star, instead, he takes on producer responsibilities. In The Americans, Rhys delivered a masterclass in playing the chameleon, and while his Mason shares some of the same worry lines as his deep-cover KGB spy, the trauma permanently etched on his soul is exhibited through wry cynicism and self-destructive behaviour. 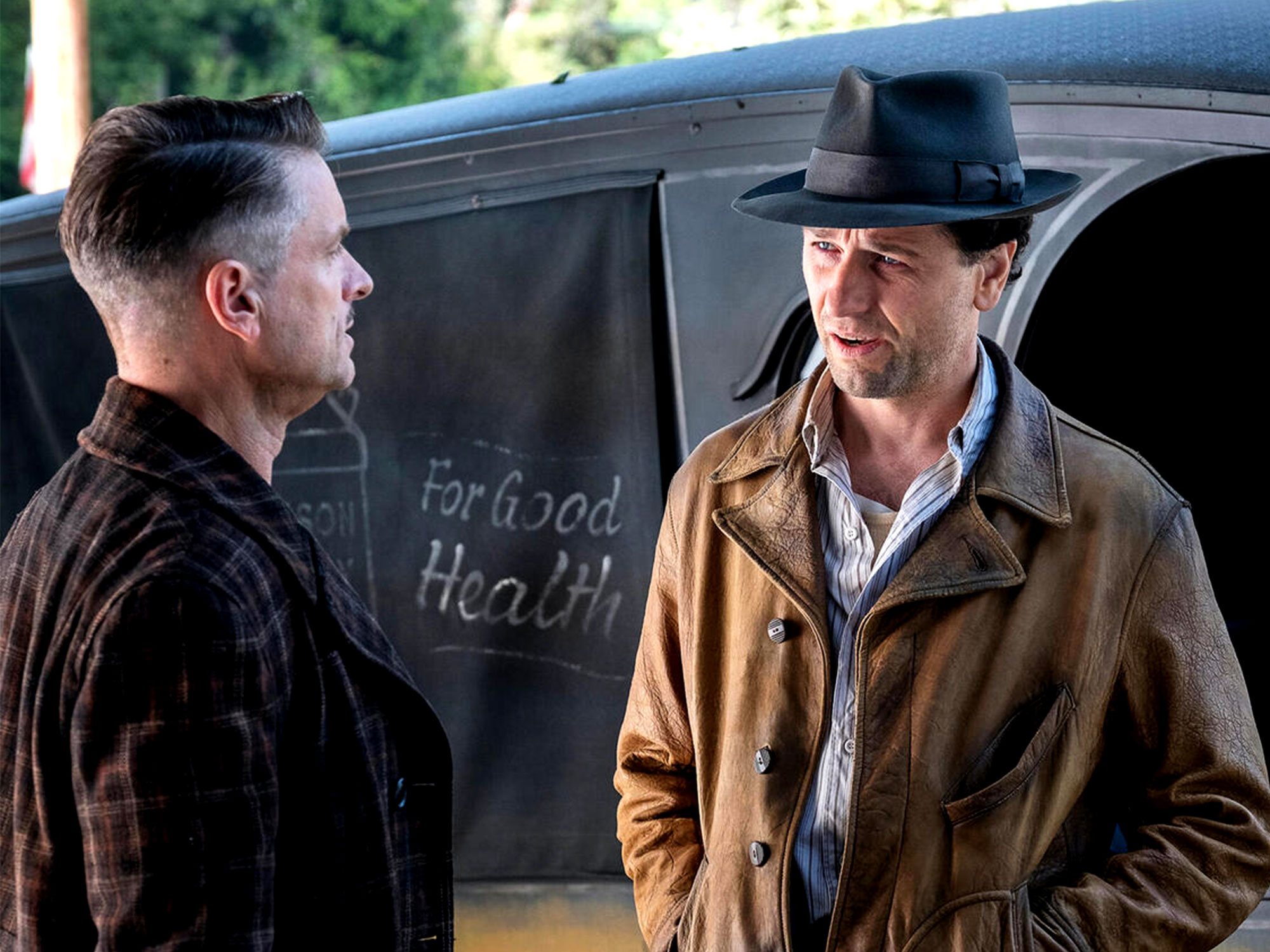 Perry Mason doesn’t hold back on crime scene imagery or violence, however, humour does pepper the darker moments, and Rhys is particularly adept at this delivery. Moments of levity occur whenever Mason’s partner of sorts, the frequently inebriated Pete Strickland (Shea Whigham) is on screen.

Reputation is its own currency and one that many of the players involved in this sordid case understand. The team is made up of veteran attorney EB Jonathan (John Lithgow), playing the father figure to the detached PI and Della Street (Juliet Rylance), who is much more than a secretary. Some of the best moments in the first two episodes occur in the lawyer’s office, which cuts through the exposition by making this world and the relationships feel lived in.

In a stacked cast, GLOW’s Gayle Rankin pulls focus whenever the grief-stricken mother is on screen. At times, the plot does get bogged down with the particulars but the introduction of Tatiana Maslany’s mysterious church leader Sister Alice instantly cranks up the tension and intrigue.

In reaction to the recent Black Lives Matter protests, depictions of the police on television as characters to root for have been up for discussion. Perry Mason follows a noir approach, painting the system as corrupt with untrustworthy cops acting in self-interest. The one exception is tenacious Black beat cop Paul Drake (Chris Chalk) whose ambition and skills are stifled by prejudice. He finds himself caught in a precarious position as the disturbing case progresses. It might be set in the 1930s, nevertheless, the themes purposefully resonate with the turbulent present.

Taking a step back in time, HBO has clearly splashed the cash on the impressive and immersive sets from the grimy streets of Los Angeles to Perry’s rundown former family farm, which now sits in the middle of an airfield. In the second episode, a flashback to the trenches in France is far from subtle but effectively underscores the horror of Perry’s combat experience in an impressive action sequence. Veteran TV director Tim Van Patten (Boardwalk Empire, The Sopranos) directed six of the eight episodes, marrying his talents for a big production with intimate scenes of explosive intensity.

A gritty origin story runs the risk of being too dour or self-serious, which Perry Mason avoids in the first two episodes by leaning into the wisecracking dialogue made famous by hardboiled fiction. Reactions to this adaptation might vary depending on how attached you are to the Burr series. Even so, the strong cast led by the magnetic Rhys ensures that even when the conspiracy sags, you will be clamouring to spend more time with this cast beyond finding out whodunnit.

The post Perry Mason revival delivers with the case of the enticing origin story appeared first on Little White Lies.