We’ve seen plenty of leaks for the OnePlus 8T, but thus far there hasn’t been a peep about a OnePlus 8T Pro. Now we know why… there isn’t one.

OnePlus has confirmed that there’ll be no OnePlus 8T Pro release this year and that the OnePlus 8 Pro will remain the flagship OnePlus device.

The word comes directly from CEO Pete Lau, who also goes by the name Liu Zuohu in China. In a post on his Weibo page (via Android Authority), Liu confirmed ‘there is no 8T Pro this year’ this year .

Lau wrote (translated): “Users who like Pro-level products can continue to choose OnePlus 8 Pro, the annual machine king. Our plan for it is itself defined in a direction where there is no room for upgrade.” He also said the “8T is a surprise worth the wait.” 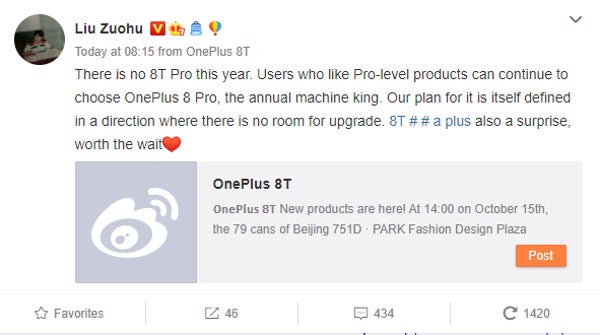 Although the translation isn’t perfect, it seems that OnePlus is setting the stage to launch one outstanding flagship Pro device each year, despite the 8T seeming set to match and surpass it in some ways.

The OnePlus 8T will have 65W wired charging, which eclipses the OnePlus 8 Pro, as well as matching the 120Hz display and 4,500mAh battery. However, the OnePlus 8 offers super fast wireless charging, IP67 water and dust resistance, a telephoto rear camera, an ultra-wide camera with a higher resolution than we’re expecting from the OnePlus 8T.

OnePlus has already confirmed an ‘Ultra Stops at Nothing’ event for October 14 where it will announce the OnePlus 8T. The company seems to be advertising a much bigger proposition ahead of the launch, encouraging fans to to tune in to “witness OnePlus make history when we unveil our plans for a more connected world.”

Are you surprised OnePlus is only going to launch a single Pro smartphone this year. Is it a smart choice? Let us know @trustedreviews on Twitter.

The post OnePlus just confirmed the 8T news we all expected appeared first on Trusted Reviews.