Google is updating the camera interface on its Pixel 4a phones in a bid to change the conversation about the use of filters to beautify selfies.

The company’s digital wellbeing lab has worked with experts in an effort to correct the damaging language surrounding the use of filters in selfies.

The company noted that apps that offer skin smoothing, slimming and eye enlargement often use words like “beautification” or “correction”, which can contribute to negative self perception. Likewise, the icons that denote those features often depict magical sparkles, which tends to connote that the perceived improvement is some kind of magic trick.

“These default filters can quietly set a beauty standard that some people compare themselves against,” said product manager Vinit Modi in a blog post.

So what’s Google doing about it? Well, for starters, the company is using “face retouching” to define the application of image features, rather than terms like “beauty”, as we’ve seen from manufacturers like Samsung.

If is also dropping terms like “natural” for slight retouching, replacing that with the word “subtle”. Google is also getting rid of those magic sparkles, instead opting for a simpler line icon to denote the change. Starting with the Pixel 4a and rolling out to other phones in the future, Google says that face retouching will also be turned off by default, which is a change from some other manufacturers.

Modi says that “you’ll see more information about how each setting is applied and what changes it makes to your image.” 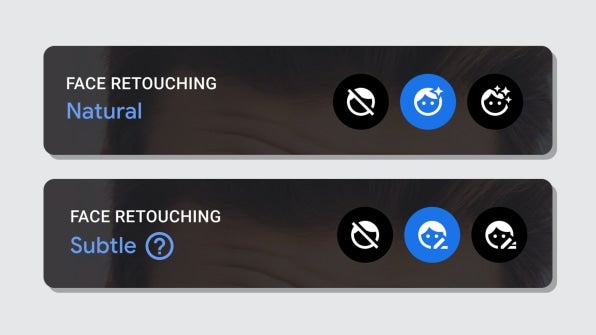 Google isn’t alone in this fight. Snapchat is on board too, with Google pointing out that the default camera interface within the app is unfiltered, despite perhaps offering the widest range of filters.

“Meaningful change takes collective effort, across a broad ecosystem of apps and devices. We’ve shared our insights and design framework with them as they continue to find ways to update their product experiences as well,” Modi said.

Google isn’t yet thinking about applying a label to all manipulated photographs, which has been advocated by mental health advocates. As Fast Company pointed out, a survey of cosmetic surgeons revealed that 72% of those seeking treatment cited a desire to look better in selfies.