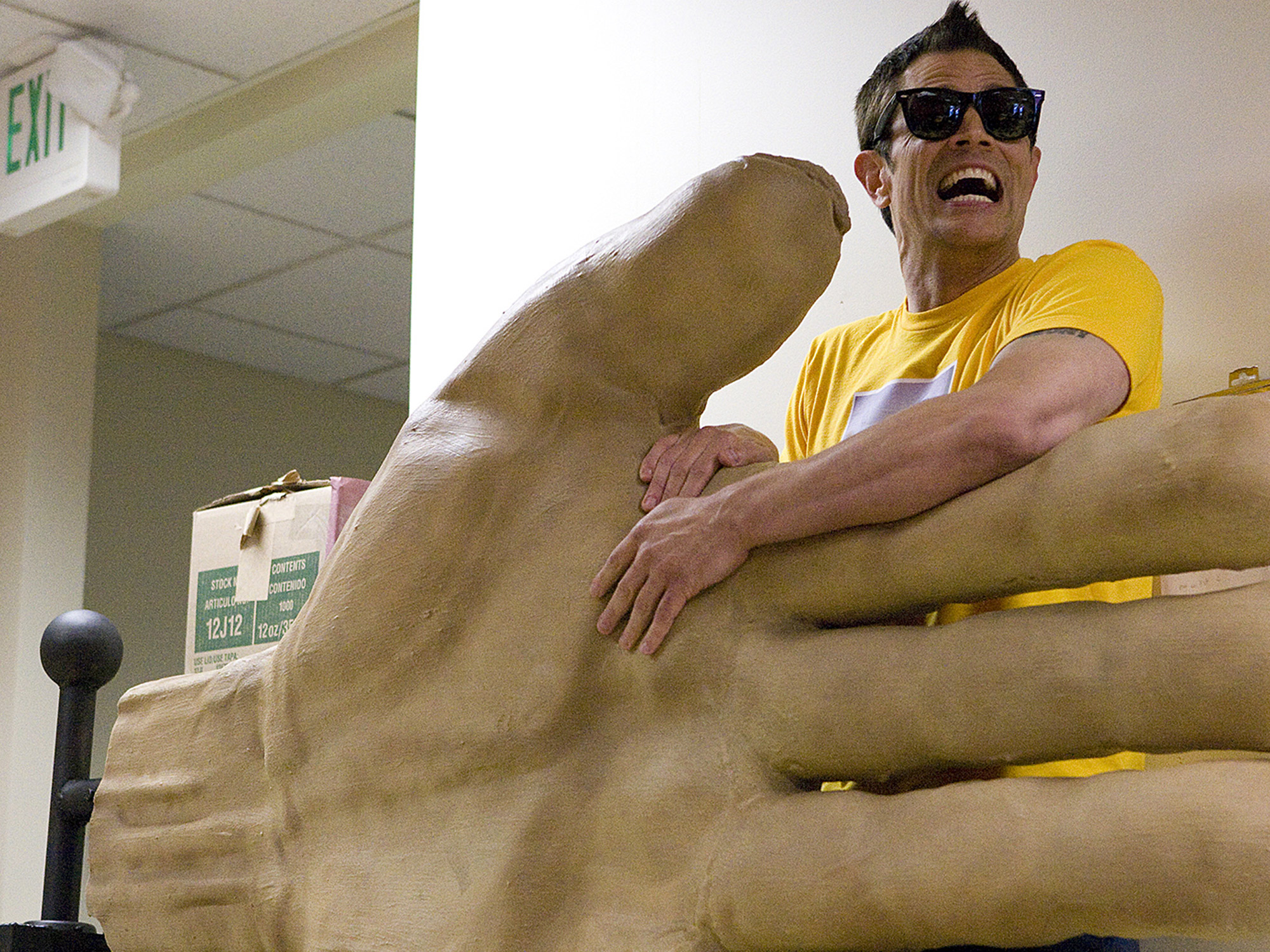 When I was a child, certain television programmes were off-limits within our house: Family Guy, South Park, Beavis and Butt-Head; and crucially, the jewel in MTV’s crown, Jackass. In part these shows were shunned because I had a fairly religious father, but I think mainly my mother just thought they were crass, and thus chose to change the channel whenever they came within spitting distance of our young eyes and ears in the living room where we watched television.

It’s not as though I grew up in a cultural black hole – I still had The Simpsons, The Fresh of Bel Air and Buffy the Vampire Slayer for my quick fix of ’90s Americana. But it did mean I missed out on a certain cultural cache with some of my peers.

I was in my lonely first year of university and a voracious consumer of pop culture when I finally discovered Johnny Knoxville and company, in part due to my extensive blogging on Tumblr, where films and television shows were condensed to memes and subtitled screencaps with a finesse no other social media network has been able to replicate since.

My reason for finally watching Jackass was simple; I recognised the cute guy from Men in Black II, and then realised this was one of the things I’d never been allowed to watch when I was younger. A fit of 18-year-old independence and obsession with social media brought that plastic LoveFilm rental wallet to my door, and a love affair began that’s still going strong almost a decade later.

Perhaps being raised on the slapstick stylings of Monty Python and The Young Ones paved the way for my fascination with Jackass – even barred from watching the show, my siblings and I enacted our own stunts from an early age, hurling Barbies and Action Men out of our windows on lengths of elastic and riding down our house’s rather steep drive on an office chair. In my preteen days, pranks and pratfalls with my friends were all the rage, before I became a self-conscious teenager who would sooner die than make a fool out of herself in public.

But my own experience with self-mutilation and pain did not come from a desire to impress or to amuse other people. I began to self-harm when I was 13 (long after the Barbies, long before Jackass) as a form of control during the early days of my struggle with mental illness. It was some time before I was diagnosed, and it’s difficult to say how this unhealthy coping mechanism impacted my reaction to withstanding pain, but when I became acquainted with Jackass, I was incredibly unhappy, and still self-harming, some five years after it began.

My self-destructive tendencies were so distinct from the ones I watched on screen, which seemed fuelled by an adolescent fascination with the limits of human endurance, rather than a desire to control one’s body in the face of mental instability. But there was a kinship between performer and viewer established, as I watched men willing to taser themselves or drink each others’ sweat in the name of entertainment, pushing the limits of human endurance and the patience of the BBFC. 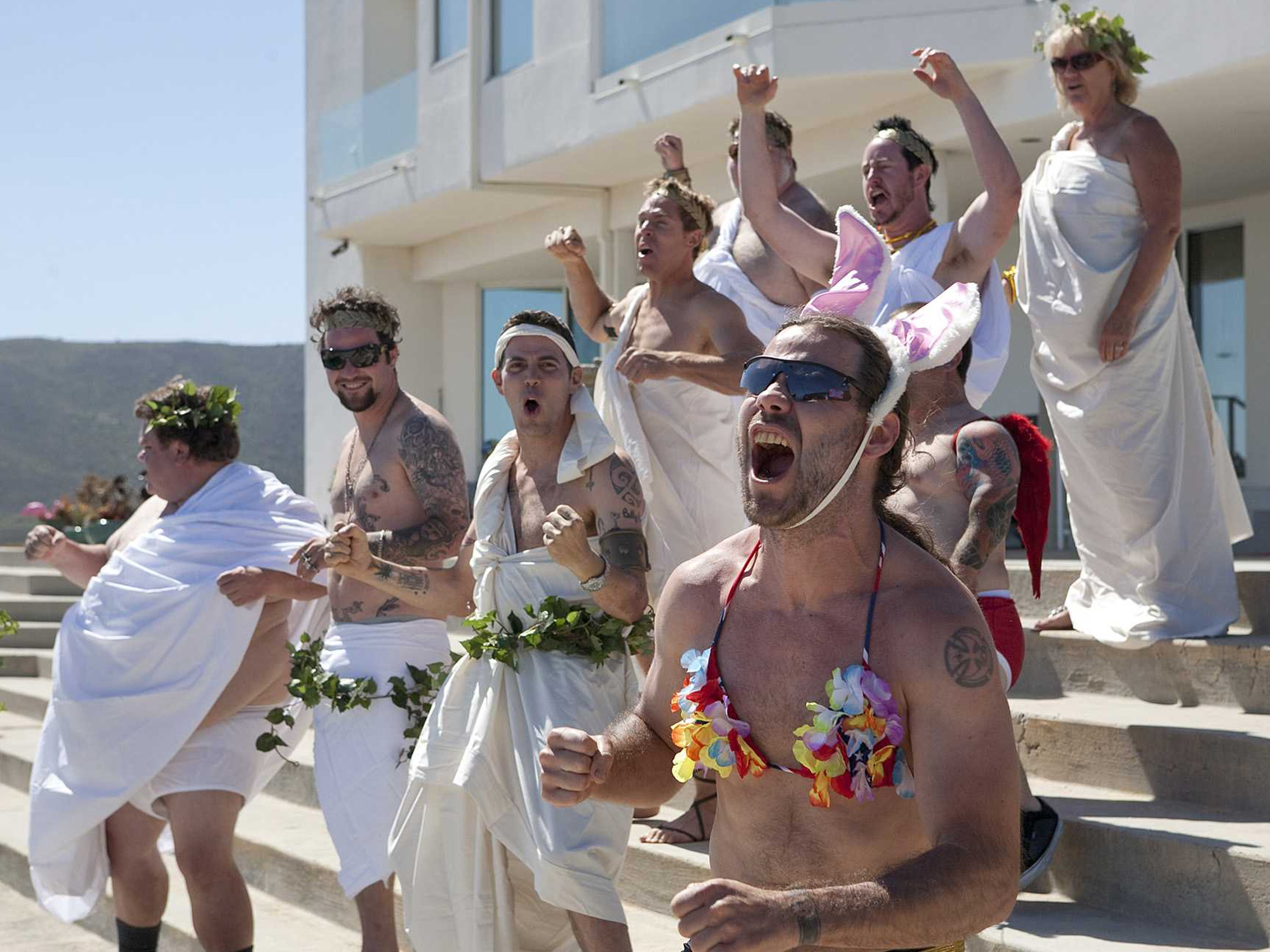 This cheerful reckoning with the fragility of the human body and the fleeting, possibly inconsequential nature of our very existence relative to the wider universe is a balm for the soul for someone as chronically unwell as I am, but another element of Jackass has always spoken to me too. There’s a deep sense throughout the trilogy (and the original television show) of how deeply each of these men cares for each other. Jokes, stunts and pranks aside, they’re quick to pick each other up and dust each other off.

Jackass 3D tips its hat to this with its delightful end credits sequence, which shows baby photos of all the stars and footage from their early days as the enfant terribles of cable television, as well as a clip of Knoxville’s teenage daughter Madison punching director Jeff Tremaine with a boxing glove, to which Knoxville replies “That’s my girl!”

It’s entirely possible that my love of the Jackass crew also stems from my own difficult relationship with men, primarily my absentee father and the ones I have encountered over the years who have shaped my attitudes towards intimacy and relationships. I don’t like to talk about the negative life experiences that have shaped who I am as a person, but now I’m much older (and a modicum wiser) now than I was when I became acquainted with Knoxville, Margera and Steve-O. I can understand why a group of chronically immature but ultimately sweet men who have genuine affection for each other and no interest in doing harm to anyone but themselves might appeal to me.

It’s a fantasy, but it’s a nice one, even with all the urine, faeces and vomit, and hearing the gang speak candidly about their own struggles with addiction, particularly following the death of Jackass mainstay Ryan Dunn in 2011, has encouraged me to consider my own reckless behaviour, particularly during the depths of my depression.

There’s also the intertextuality of Jackass, which appeals to my sensibilities as a meme historian and profound love of movies which acknowledge movies – in Jackass 3D, William Tell, Rocky and Duck Hunt all get a look-in, but it’s the recreation of the Maxell advert using a jet plane engine which always blows my mind. In the aftermath, the gang experiment throwing various objects into its downstream.

When Bam Margera decides to urinate into the current, unsurprisingly, it blows back and covers him before he is literally swept away. Knoxville, observing, gestures to Margera. “That’s the story of Jackass right there,” he says. “Just pissing in the wind.” But as the old adage goes, to play a piano badly, you have to know how to do it well; chaos reigns in the world of Jackass, but it’s always meticulously rendered.

As for Jackass 3D’s crowning glory, I have tried many times to describe the perverse joy I get out of the film’s opening stunt, which sees grown men being body slammed by a giant fibreglass hand on bungees, while their comrades proceed to collapse into giddy hysterics at the carnage. But I don’t think I’ll ever be able to do it justice since the greatest summation of the scene comes from Knoxville himself, who squeals, incredulous – while Ehren McGhehey lies dazed on the ground covered in the debris of a trayful of food – “He fell for the soup!” I think of this line more often than I think of perhaps any other quote from film or literature.

I can understand the reticence of some to attribute value to Jackass 3D, but for me there is nothing more I crave than the familiarity and deceptive simplicity offered by it. Even the songs that play over the end credits, Karen O’s cover of ‘If You’re Gonna Be Dumb, You Gotta Be Tough’ and Weezer’s ‘Memories’, speaks to the show’s heritage, but also encapsulate everything it stands for: nostalgia, camaraderie, tomfoolery and a healthy dose of sheer, dumb luck.

At a basic level, I just find Jackass funny – but I also firmly believe that at some point in our lives, we all fall for the metaphorical soup. It’s the Jackass crew who taught me to be willing to laugh about it.