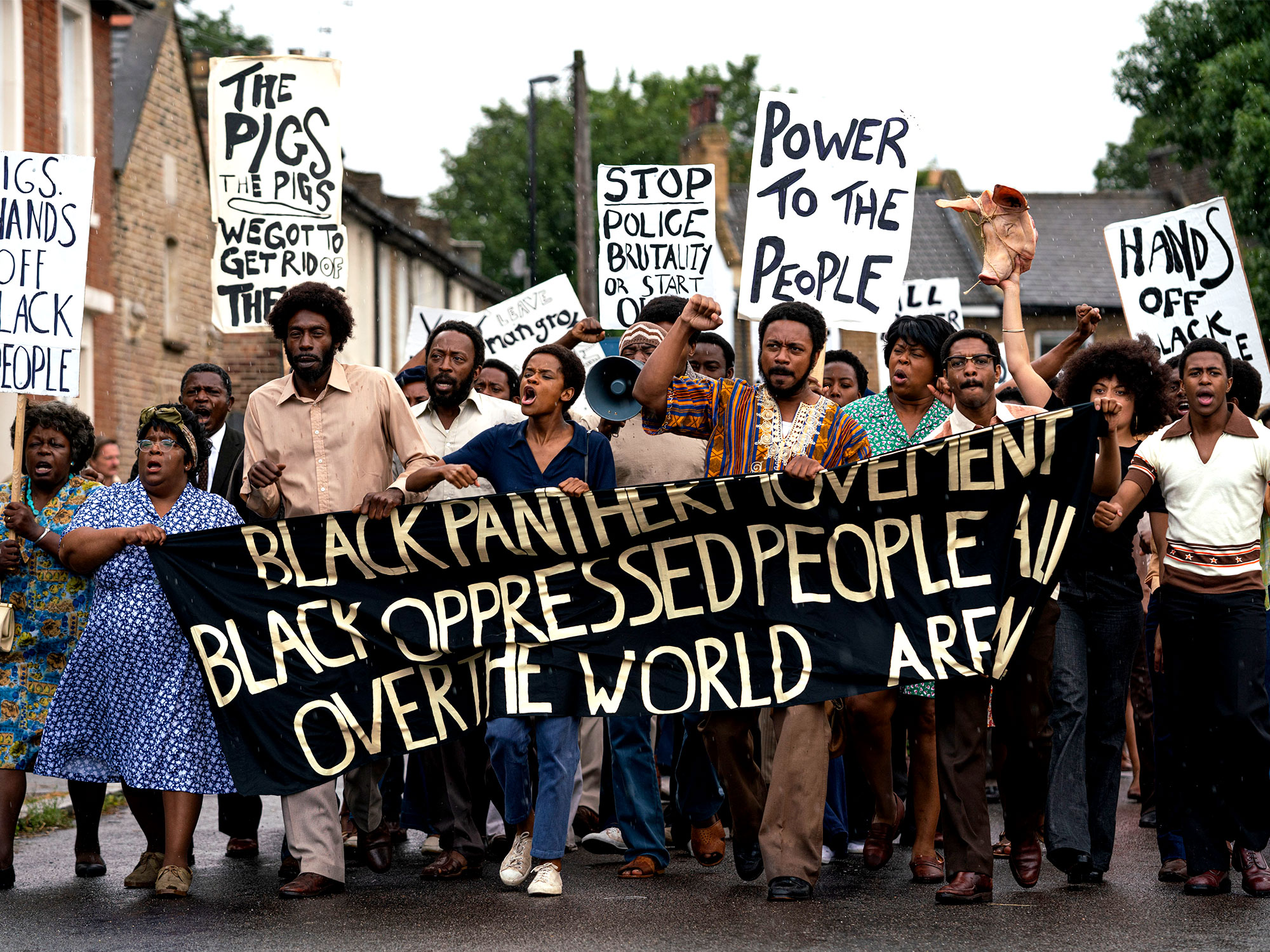 ‘Black Ownership’ read the sign in the window of Frank Crichlow’s Mangrove restaurant. Notting Hill in 1968 was a sanctuary for West Indian people, invited to help rebuild Britain after the war, a place to call home. The sign was not there to signal where to throw your money in a show of solidarity, but to signify safety and comfort to the Black people it catered to.

Steve McQueen’s Mangrove first centres on the “state sponsored attempt to shut down [Crichlow’s] business”, as stated by Letitia Wright’s British Black Panther leader Altheia Jones-LeCointe. The second half of the film focuses on the Mangrove Nine trial, a claustrophobic 55 day legal proceeding involving nine Black activists who participated in a demonstration against the incessant, violent police raids of the Mangrove – three of whom represented themselves in court. 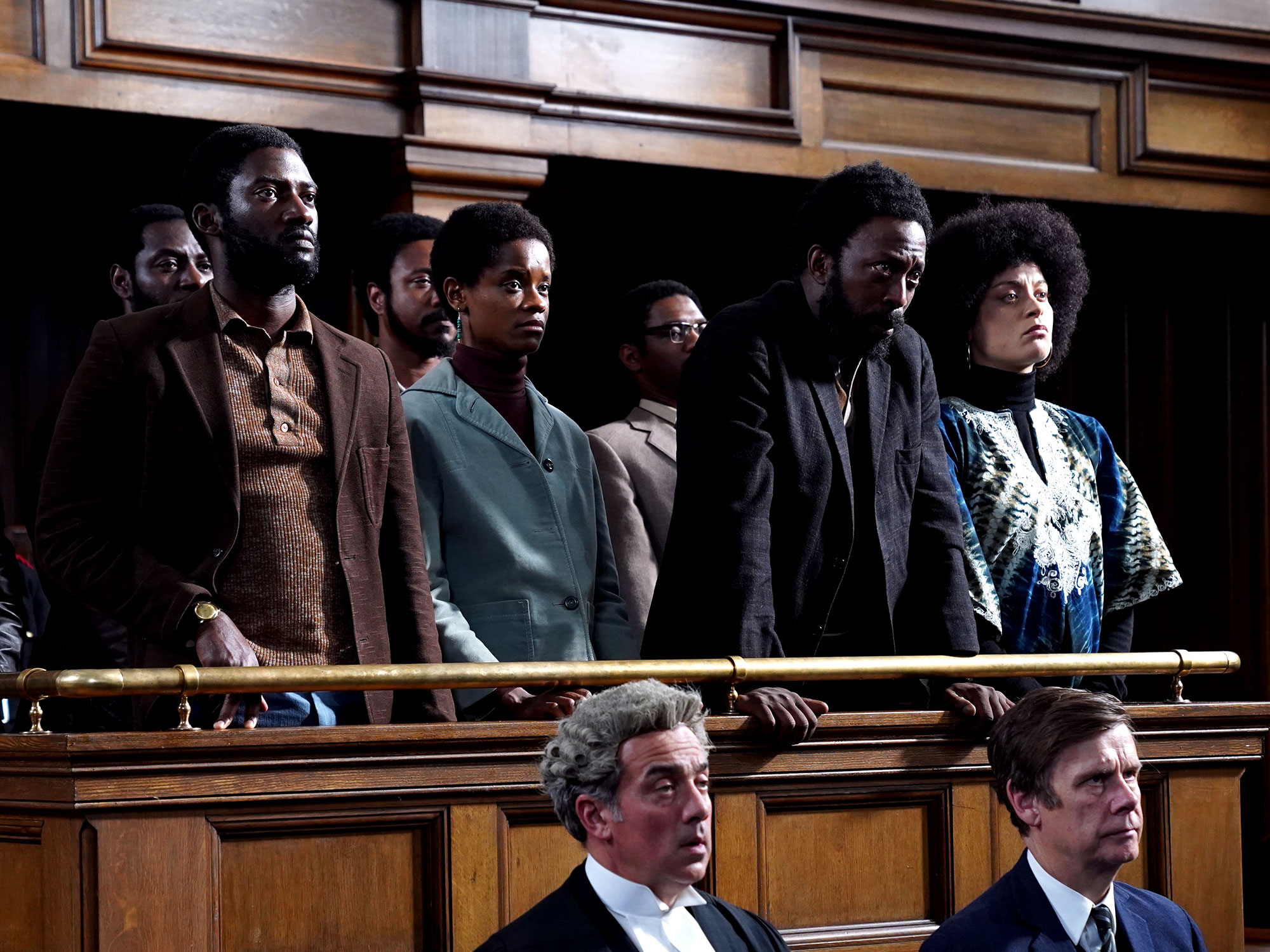 McQueen’s deft direction creates a pressure cooker environment, relaying a world that forced men like Frank (Shaun Parkes) to be more than restaurant owners but activists in defence of their right to live peacefully. Frank built a home for himself and his community, contorting it to the ever-changing confines of the law until he had no room to twist.

Unable to continue misplacing his faith in the establishment, Frank turns inward to the British Black Panthers. After persistent police presence drove regular customers away, the Panthers turned the Mangrove into a community hub. Their demonstration drew roughly 150 protestors and more than twice as many police.

The main ensemble of Frank, Altheia, Darcus Howe (Malachi Kirby) and Barbara Beese (Rochenda Sandall) are brought to life with immense tenderness by the ensemble. The anxiety and furious determination we read on the lines of Frank’s face can also be heard in the unwavering clarity of Altheia’s voice, seen in the slant of Darcus’ shoulders and the curl of Barbara’s lip.

Shot on 35mm by first time McQueen collaborator Shabier Kirchner, the visions of food, fashion and late ’60s London feel torn straight from a family photo album. The many joyous moments in the film brim with warmth and song, before being abruptly cut short. The intensity of the sound design is breathtaking – as memorable as the Caribbean soundtrack is the exasperating sound as the nine enter the Old Bailey for the first time, a noise like a stretched police siren.

The stifling sequences of police brutality are visually unfamiliar in this context: we know it happened – and happens. McQueen choses to share this buried story with total reverence and care for the architects of our collective history. Masters of look-over-there, anti-Black racism is not a defining feature of British history in the public conscious. The onus is then expected to fall on those who survived the brutality to record the history – a task sometimes impossible when all that’s desired is to live a life.

Mangrove is a necessary and exhilarating illustration of the staying power of Black Britons. We were not docile in the face of brutality, we were decisive and self-determined. McQueen reminds us that we are not inventing the wheel, and that only the knowledge and preservation of history can lead us forward.