Might “Gaza-ification”– a Gaza-style form of stabilization that is still a long way from a stable peace agreement– be a viable way of alleviating the  currently dire humanitarian situation of the residents of Syria’s northwestern Idlib province? This prospect might seem little better better than the current situation of Idlib’s three million or so residents, but it  recently gained a small amount of traction in a Washington where everyone realizes that no US military action to “save” Idlib’s people is either possible or likely.

The likelihood– and viability—of the “Gaza-ification” scenario both hang precariously on whether one judges that Hay’at Tahrir al-Sham (HTS), the jihadist group that has controlled Idlib since 2017, is a potentially valid political interlocutor that has the best interests of Idlib’s people in mind. 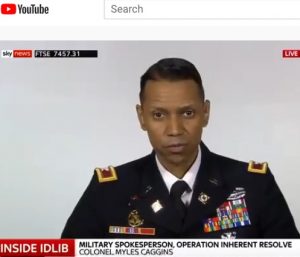 For many years now, HTS and its predecessor formations have been on Washington’s list of designated terrorist groups. On February 21, Col. Myles Caggins, the spokesperson for the U.S.-led coalition that has been fighting ISIS in northeastern Syria and Iraq stated bluntly that Idlib under HTS control had become “a magnet for terrorist groups from all over the world” who had become “a menace and a threat” to the enclave’s people.

Idlib’s current, intense humanitarian crisis has come as Syria’s national army and its Russian allies have had some success in regaining control of the Idlib enclave from HTS, by force. For its part, HTS has long enjoyed a large degree of support from Turkey, which borders the enclave to the north.  In the past two months, as the Syrian-Russian coalition advanced into Idlib, NATO member Turkey started sending in armored units of its own, and some staffed by its close (non-HTS) allies.

The geopolitics of the situation are complex. Russia enjoys air superiority over the whole region, from its air-base in nearby Hmeimim. Turkey is almost certainly unable to prevail in Idlib—but Russia has many other items on its burgeoning bilateral agenda with Turkey and is probably reluctant to bludgeon its way to complete victory in Idlib.

Add to this that Turkey, Russia, and indeed the whole world community have another strong interest in not seeing a complete collapse of HTS’s positions in Idlib. As Col. Caggins acknowledged, Idlib under HTS has become a hotbed for the most extreme jihadi terrorists from all over the world. If HTS’s positions in Idlib collapse completely, then those individuals would be likely to flee along with large numbers of civilian refugees into Turkey, en route to possibly traveling elsewhere.

(The political challenges posed by the fighting in Idlib are just as massive and vexing as the enclave’s humanitarian crisis. Few people in the United States are aware of this, though, since the large national media outlets have ignored the role jihadists have played inside Idlib, choosing instead to report apolitically– and always from a distance– on only the humanitarian challenges there.)

Recently, a handful of Western think tanks have started to explore scenarios for Idlib’s future that take into account the control that HTS exercises over most of its terrain. One of these is the Brussels-based Crisis Group, which in late January sent a staff delegation to Idlib to conduct a four-hour interview with HTS head Abu Muhammad al-Jolani. The other is the Middle East Institute (MEI) in Washington, DC, where on February 21 staff member Charles Lister sketched out what he called the “Gaza-ificiation” of Idlib, which he described as “the least bad scenario” for he enclave. (I explore below the limitations of this analogy.)

In the interview Jolani gave to the Crisis Group, he sketched out a very similar scenario for HTS in Idlib. Jolani had described the decision he took some years ago to affiliate with Al-Qaeda as one of necessity, since he felt he still needed some form of worldwide jihadist alliance after he and his group broke off from ISIS. with whom he had earlier fought in Iraq. “However,” he said, “I conditioned my pledge [to Al-Qaeda] on the notion that we would not use Syria as a launching pad for external operations. Nor would we allow others to use it for such a purpose. I made clear that we would focus exclusively on our struggle against the Syrian regime and its allies in Syria.”

In its report on the interview, the Crisis Group noted that “in its rhetoric”, HTS had long called for the overthrow of Syria’s current government and the departure of the Iranian and Russian forces allied with it– “even as such objectives have become increasingly unrealistic.” It also noted that in 2017, HTS had supported the establishment of a “Salvation Government” in Idlib to administer the enclave’s day-to-day affairs.

For his part, Jolani told these interlocutors: “Our basic principles are clear, and our mid-term plan is to stabilize the area under our control and administer it through an alliance of local Syrian revolutionary forces that are committed to protecting Idlib.”

From this point of view, Jolani’s successive “retreats” from seeking worldwide jihad, to seeking to control only Syria, to seeking to control only a small peripheral portion of Syria might indeed seem like the successive “retreats” Hamas has made since early this century from seeking to overthrow all of Israel, to seeking to participate in the governance of both the West Bank and Gaza, to finally agreeing to administer only Gaza– while not completely disavowing all of its earlier, broader goals. There remain, however, several key differences between Hamas and its rule in Gaza, and the kind of HTS control over a landlocked Idlib enclave that Lister and his colleagues at the MEI event seemed to be envisioning.

First of all, Hamas is a very different kind of Islamist organization than HTS. Hamas is deeply rooted in Gaza and the rest of Palestine and unlike Jolani and his allies has never had any “global” jihadist aspirations. Then, in 2006, Hamas participated in good faith in (US-supported) Palestinian parliamentary elections that were judged to have been free and fair—something HTS has never done. (Hamas proceeded to win the 2006 elections, which strongly dismayed both Israel and Washington.)

Hamas’s members created and continue to run broad networks of social-service organizations in Gaza, many of them run by women; and Hamas strongly supports the idea that women should be well educated and work outside their homes. Four of the Hamas MPs elected in 2006 were women. And on a number of occasions Hamas’s fighters have had to fight harsh battles in the streets to subdue ISIS- or Al-Qaeda-aligned groups that challenged it.

By contrast, in Idlib HTS and its affiliates continue to enforce the harsh, austerely misogynistic norms of ISIS or Al-Qaeda; and their ranks still include the foreign fighters from Uzbekistan, Tunisia, eastern China, Chechnya, and numerous other countries who have been actively welcomed to Idlib by HTS for many years.

Secondly, the geographic/political aspects of the two situations are very different. The beachside Gaza enclave that Hamas administers is totally encircled by a hostile Israel–from land, air, and sea. The Idlib enclave that HTS controls is largely mountainous and is enclosed by two quite different, and competing, powers: to the south, Syria and its Russian allies, and to the north, Turkey.

The support that Turkey has given to HTS in Idlib has been a point of great contention between it and Russia. Under an agreement the two parties (and Syria) concluded in Sochi, Russia, in September 2018, Turkey had promised to disarm HTS as part of a broader de-escalation plan. It never did. Instead, until very recently it continued to send weapons and other supplies to HTS. Then in December 2019, Turkey sent some of its own armored units, and others manned by their Syrian-exile surrogates, into Idlib to help HTS resist the Syrian-Russian advance then underway.

At the MEI event, Lister said, “Turkey would have no option but to accept HTS governance in Idlib… My understanding is that Turkey doesn’t regard HTS as a friend but they have established themselves as the only organization capable of using an iron fist to keep the internal situation more stable than it was in the past.”

An HTS-run Idlib enclave would thus, under Lister’s scenario, have a powerful, generally friendly neighbor with whom it could continue to coordinate and that would allow it to have considerably more access to the outside world than Israel has ever allowed to Hamas in Gaza.

In making the case for Western countries to accept the consolidation of HTS’s control in Idlib as the “least bad” option, Lister and others on the MEI panel made two kinds of arguments. They tried to claim that the role played in Idlib by global (non-Syrian) jihadists had already been considerably reduced, though they adduced no evidence for this. They also made a number of references to the disasters that could befall Turkey and the rest of the world if a complete collapse of HTS’s positions in Idlib should send a large new wave of refugees (most likely intermingled with foreign jihadists) into Turkey and quite likely traveling elsewhere from there.

This latter possibility is one of HTS’s main forms of leverage over Turkey and over the many other countries that could expect to be impacted. Already, online activists from within Idlib have been urging their neighbors to flee to the border with Turkey and to breach it. Turkey, which hosted 3.5 million Syrian refugees in the early years of the anti-Assad uprising, closed its borders to additional refugees back in 2018 amid rising anti-refugee sentiment nationwide and a growing economic crisis. It has also been sending as many Syria refugees as it can back into the parts of northeastern Syria that its forces entered last year. Opposition parties inside Turkey have meanwhile started calling for the government to renounce its longheld aim of overthrowing the Assad government, and to open negotiations with Damascus directly.

Amid this volatile political situation, the long-stressed population of the Idlib enclave continues to suffer grievously. Clearly, humanitarian concerns should lead us to explore every possible avenue for a negotiated de-escalation of this crisis rather than a continuation of the fighting. Whether HTS itself should be a direct participant in any such negotiation is a complex matter. Maybe, as at Sochi, it should be left to Turkey to deal with the global-jihadist concentrations in Idlib that HTS’s rule there has incubated. But one way or the other, both those jihadist concentrations and the ongoing humanitarian crisis in Idlib need to be speedily addressed.