If you were to ask an astrologer how to read a natal chart, you’d likely get an answer of laughter and serious side-eye to communicate a general vibe of, “Oh, sweetie.” That’s because learning how to read a natal chart with the precision and know-how of a professional can take years of dedicated studying in order to tease out real and cohesive meaning. Case in point: I’ve had three different horoscope readings in the last four months, and while none of them contradict each other, each ultimately revealed different dimensions and (very literal) aspects of who I am. 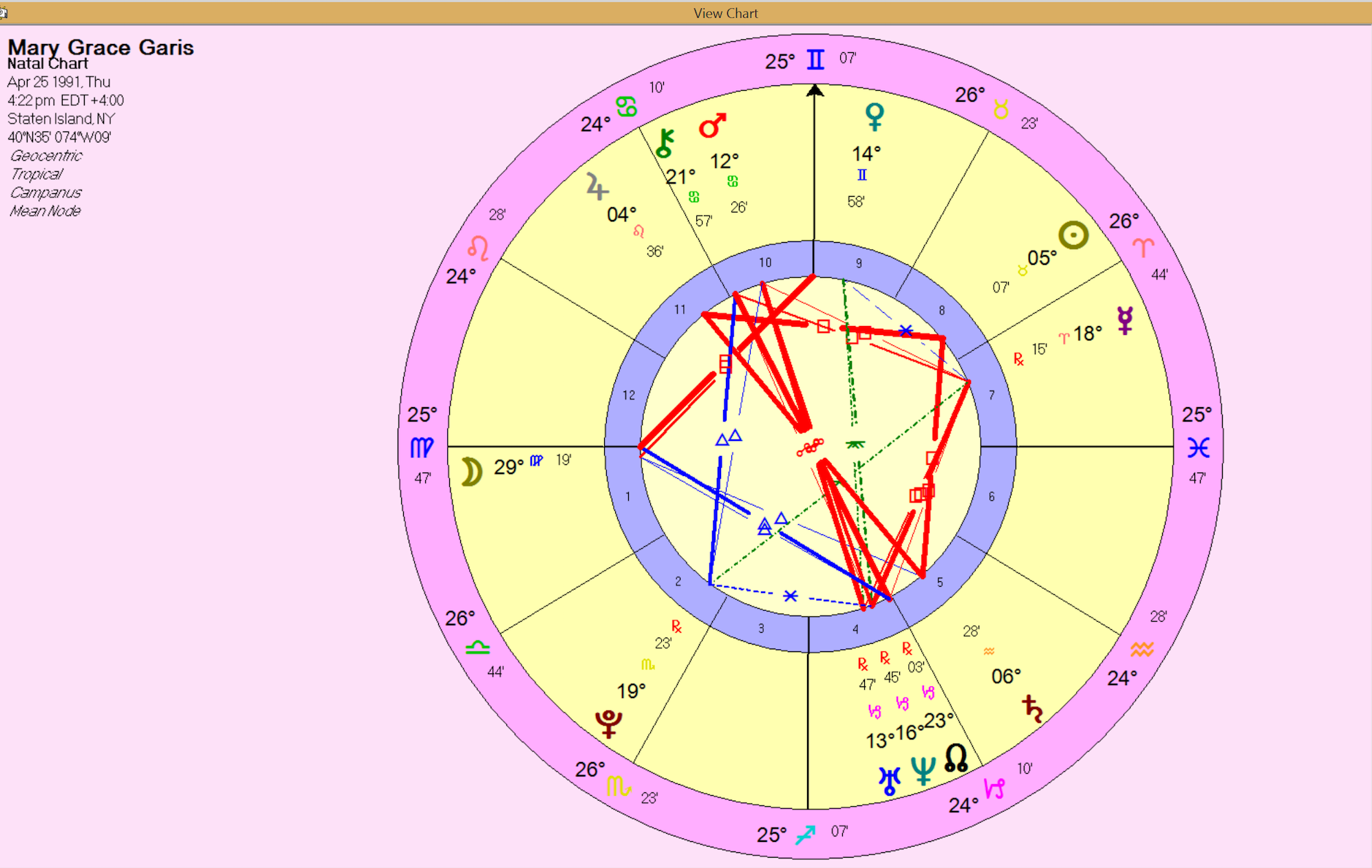 But since to the naked eye on first glance, natal charts (like mine, pictured above) look more like concentric circles with a complicated geometry proof in the center than a bastion of information explaining your cosmic background, you may be interested in some basic information to level the playing field just a bit. That, friends, is absolutely feasible.

Using my birth chart and the findings from several readings I’ve had using it, find an overview below of how to read a natal chart by recognizing planetary symbols and their placement. (And to follow along using your own personalized natal chart, run a free version using an online generator like this one.)

How to read a natal chart using planets as a guide

Natal charts include planetary placements, which is where a given planet was when you were born, based on your geographic location. The planets are represented on natal charts by glyphs, and while alternative versions of said glyphs, exist, the below depiction is generally how you can expect them to appear. The main significance to these planets and their placement is that they represent different aspects of your personality. So if you ever hear an astrologer say something like “your Venus is in Gemini” or “your Venus sign is Gemini,” they’re referencing that a certain star sign (in this case Gemini) influences whatever personality trait that the planet (Venus) pertains to.

With this in mind, being able to recognize the planets in your chat, as depicted using the glyphs below, and deciphering what each placement means is key for better understanding how to read a natal chart. Get that info, by planet, below.

Glyph: A circle with a dot in the middle

The sun is a star, and it’s the one most associated with your horoscope, which is why that’s often referred to as your star sign. It reflects your most dominant personality and direct identity.

My sun is Taurus, which means I’m sensuous, stubborn, practical, and pleasure-focused. Jennifer Freed, PhD, psychological astrologer and author of Use Your Planets Wisely, pointed out during my reading that my sun sign in Taurus also means I’m very steady, stable, and unfortunately loyal to the wrong people. But that’s just me.

Your moon sign is basically a reflection of your emotional personality and your inner self that not everyone gets to see on the surface. Your moon speaks to your emotions and who you really are, deep down. My moon sign is in Virgo, which means I’m an ideal writer (yay) and, according to Dr. Freed, I “have almost an obsessive need to do things well and do things right.” Generally, this quality is cool for work, but not so much for life—Virgo moons need to remember not to neglect self care.

No, you’re not misremembering 6th grade science—this is, in fact, not a planet. But it is still important background for being able to read a natal chart, so it’s being included for reference. Your ascendent or rising sign is the outward image that you project to the world.

Glyph: A circle with two “horns” and a cross underneath

We often associate Mercury with the unique horrors of Mercury retrograde, but this planet isn’t all bad. In astrology, Mercury focuses on intelligence, communication, travel, and technology, and according to Jessica Lanyadoo, astrologer and author of Astrology for Real Relationships, Mercury is very important in my chart. The planet rules over Virgo and Gemini, which pop up all over my chart, but I also have Mercury square Uranus in my chart, which is a nutty-genius sort of aspect that makes me an eccentric thinker.

Glyph: A circle with a cross underneath (female symbol)

Venus is the goddess of love and beauty, so your Venus sign is pretty much your astrological love language—how you tend to give and receive affection. My Venus happens to be in Gemini, which means that I generally attract people (and vice versa) with my words. “This is a great signifier of your capacities to meet and greet and get along with anyone,” says Dr. Freed “It also means that you have a lot of different tastes in love attractions.”

Glyph: Circle with an arrow pointing diagonally (a male symbol)

Mars conjures a fiery, red-hot, bold, assertive vibe, and your Mars sign focuses largely on aggressive, action-oriented physical things—basically whatever gets your blood pumping. It’s a showcase of your sex life and can help you determine what workout is best suited for you. My Mars is in moody Cancer. And according to my sexoscope reading with with Stefanie Caponi, resident astrologer for Swell by Dame Products, that means my action is very intuitive.

Jupiter has hugely optimistic energy: It rules over luck, good fortune, truth, and how we want to grow and expand. According to where Jupiter is on my chart, it looks like I’ll be able to grow in publishing and have extreme luck elevating my voice across different channels.

Glyph: A curly “h” with a cross on top

Saturn represents challenges, responsibility, rules, and all the things that scream, “YOU’RE AN ADULT NOW!” This is often associated with Saturn return, which happens every 28 to 30 years, and which Caponi says gets a bad rap. I’m swiftly approaching my return, and with a Saturn in rebellious Aquarius, it’ll be about rebelling against my parents’ wishes and becoming my own person.

“You spend your twenties giving yourself permission to, like, show off, exist, and really define your style,” says Caponi. “Be who you are out in the world, and also, there’s still this like feeling and need of, ‘Oh, I need to make my parents happy.’ So Saturn comes around at 29, it basically puts all of this new pressure on you to like ‘adult’ in a new way that’s authentic to you and your life, and separates you from what you think your parents want. Because your parents are going to love you, they just want you to be safe.”

I’m not saying this directly refers to how my mom named me after the Virgin Mary and now I write sex toy reviews, but I’m also saying it might exactly be that.

Glyph: Three vertical lines, with a bulbed end on the center line and a horizontal line cutting through the middle

Uranus in your chart speaks to what makes you original and unique—it’s actually the ruler of Aquarius, who is all about individuality. My chart reflects that Uranus is in Capricorn, and that applies to anyone born from 1988 to 1996; we’re talking peak millennials and the very start of Gen Z.

Neptune stays in a sign for 14 years, so it, like Uranus, applies to a cluster of people rather than individualized special snowflakes. Neptune is a creativity hub—which makes sense, since water signs are often so artistic—and rules over dreams and the imagination. My Neptune is also in Capricorn.

Glyph: A wine glass with a circle in the center

Tiny, little Pluto manages to be have a miiiiiighty large transit: It takes 30 years for Pluto to move to the next sign, meaning it’s broader than a single generation. So for me and a huge expanse of other individuals, Pluto is in Scorpio, the very sign it rules over. That means we’re obsessive, passionate, intense, and a little bit self-involved.

It bears mentioning that different planets do happen to rule over different signs. For example, Venus rules over Taurus and Libra, so if you have a Venus in Libra, you’ll feel very at home when it comes to loving and romance. If you’re curious as to which planets and star signs are connected, feel free to check out the graphic below. The outer rim is indicative of the star sign’s glyphs, and the inner circle shows what planets they’re attributed to. 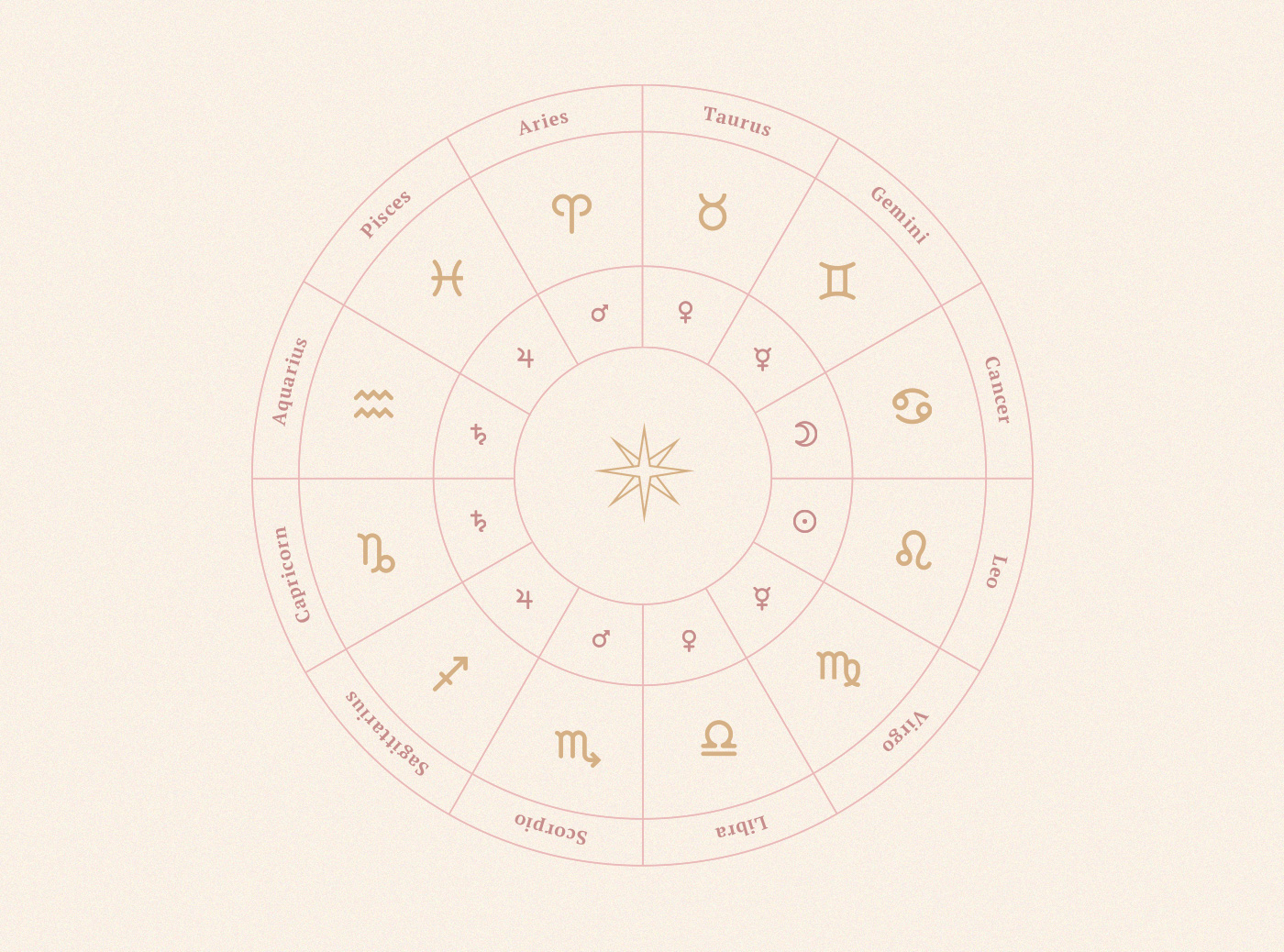 And finally, while all of this information about what planets mean and how they look in symbol form is helpful for knowing how to read a natal chart, the intel still barely scratches the surface of all your chart can offer. Luckily there are plenty of books (like these!) available that can offer deeper wisdom, and even online courses, for the dedicated astro-students. And, of course, there’s always the option to seek a session with an astrologer to guide you through your chart.

Here’s what to do if you get a not-so-great horoscope reading and the best time of day to read your forecast.