The LG Wing is one of the most bizarre phones I’ve ever used. It’s completely different to just about every other phone on the market and you have to give LG props for trying something to differentiate it from the norm.

In many ways, the LG Wing feels like LG’s offering against the Samsung Galaxy Fold 2 and Moto Razr 5G. It’s an experiment, more of a concept than a true device people are expected to buy. Unlike those two other phones, the Wing isn’t foldable – but it’s got plenty of tricks inside.

On first glance, the LG Wings looks fairly normal. A tall, slightly chunky candy bar with a marginally curved display and a frosted glass back. However, housed underneath the main 6.8-inch OLED is a secondary square OLED screen that appears when you flip the main display out. This leaves you a with landscape screen on top, flanked by a smaller secondary 3.9-inch panel below. You really have to see it to understand. 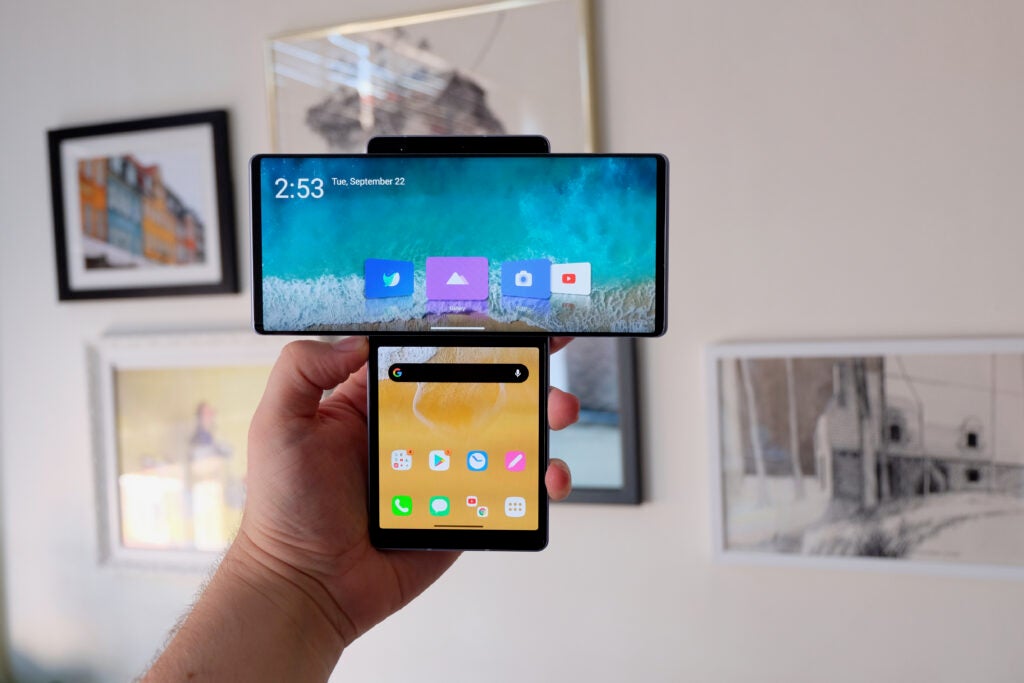 The first thing I noticed was how slick the motion is to flip the display out. Just push on the side and the force will swivel the screen into its new position, with some optional added sound effects if you want them. I can’t keep track of how many times I have done this without actually wanting to turn the phone on – it’s just very fun.

The Wing is, no doubt about it, thick and heavy – that is when compared to the competition. It tips the scales at 260g and can be a faff to fit into tighter trousers. But, it doesn’t feel too thick or too big – especially for a first-gen product. It also has some features I expected to be ditched, including wireless charging, an IP54 rating and expandable storage. 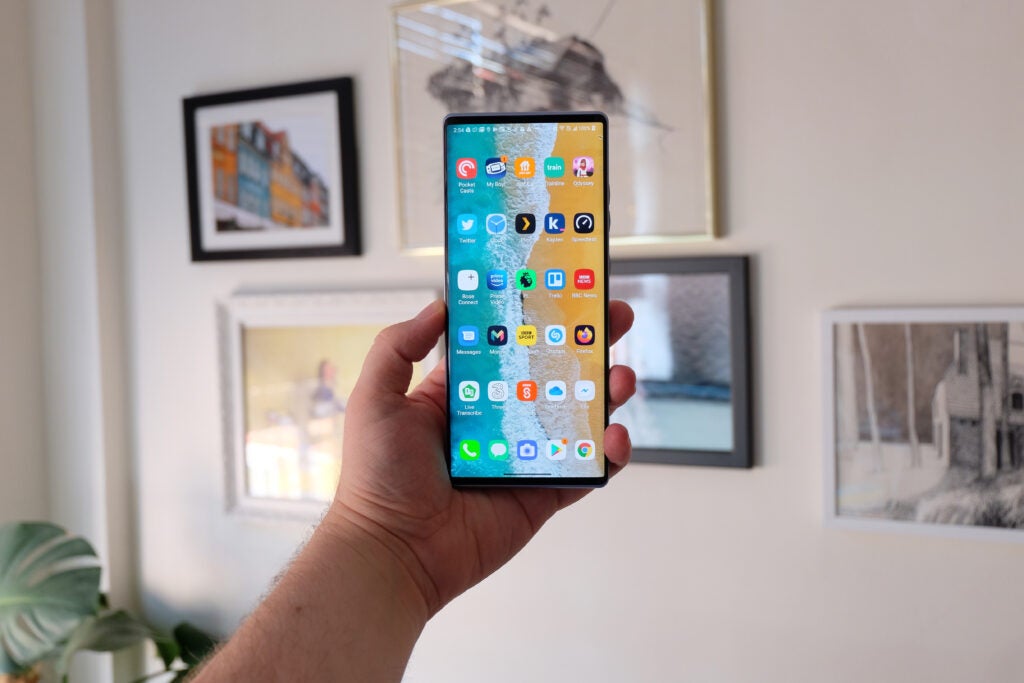 Of course, while the overall design is unique and different, it’s what it brings to the smartphone experience that will make this a success or not. While I do like the way the Wing looks, I am less convinced about the reason why it exists.

I’ve been using this phone for about a week now and I’ve yet to find a instance where the multi-screen gimmick makes things better. Yes, you can multitask by having a video on the widescreen display and then the controls on the bottom, or have the dialler and maps open at the same time when you’re driving – but neither of these feel like problems that need solving. 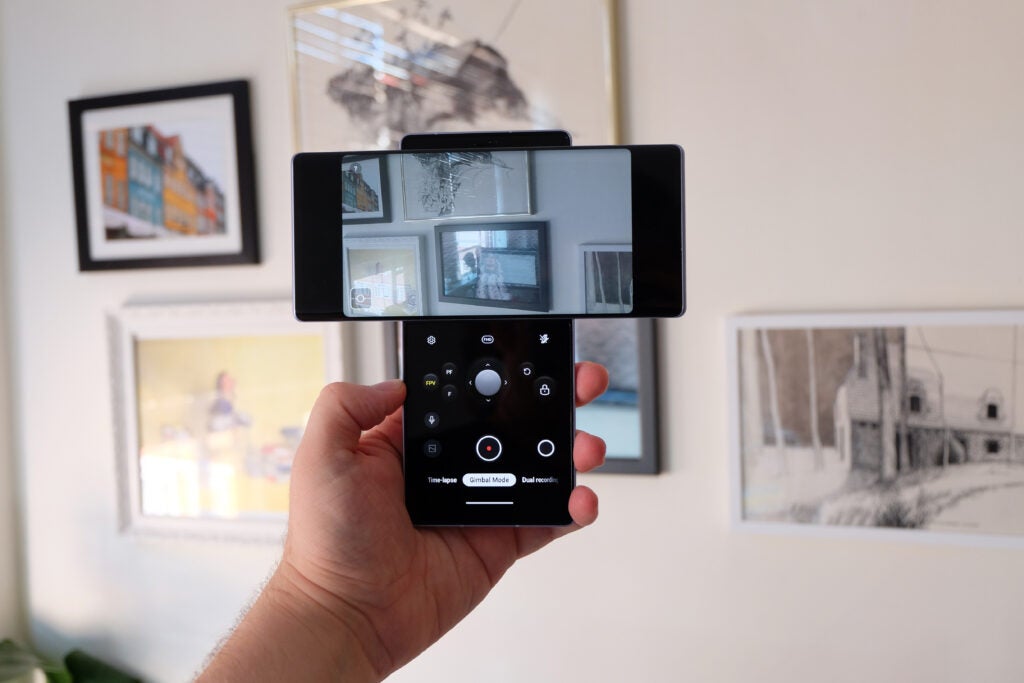 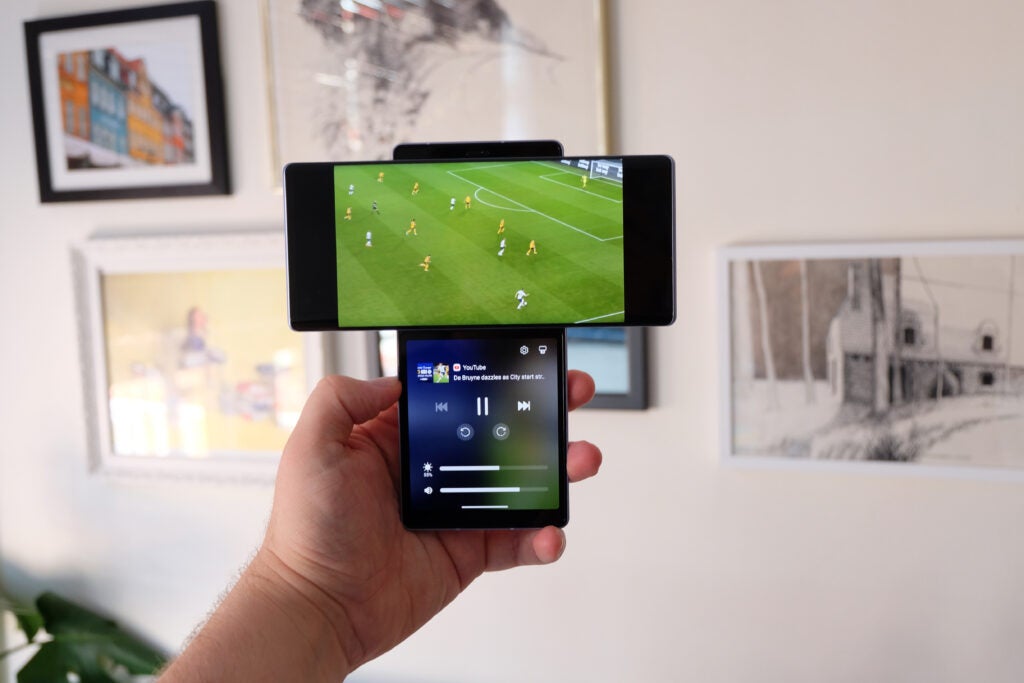 But, it still needs something better. Once the novelty of the design fades, there’s little here to keep anyone interested.

LG said this unit is a pre-production device, so I won’t delve too much into performance or battery life until a full production unit arrives. There is also no confirmed price yet. I can talk about specs though. Inside there’s a Snapdragon 765G, 8GB RAM and a 4000mAh battery. The phone feels fast, if a little buggy (to be expected with the pre-production note), however the battery capacity seems to struggle if you’re using both screens a lot.

The cameras, on the other hand, seem good – which is hardly a surprise considering LG has consistently made excellent smartphone cameras. There’s a main 64MP camera on the back, paired with a duo of ultrawide sensor. On the front LG has taken the odd decision to house the 32MP sensor inside a motorised pop-up, which makes for an odd visual when you got the camera up and the screen flipped around.

While it might be hard to suggest someone goes out and pre-order one of these, there’s no doubting the Wing is an interesting handset with a unique look.