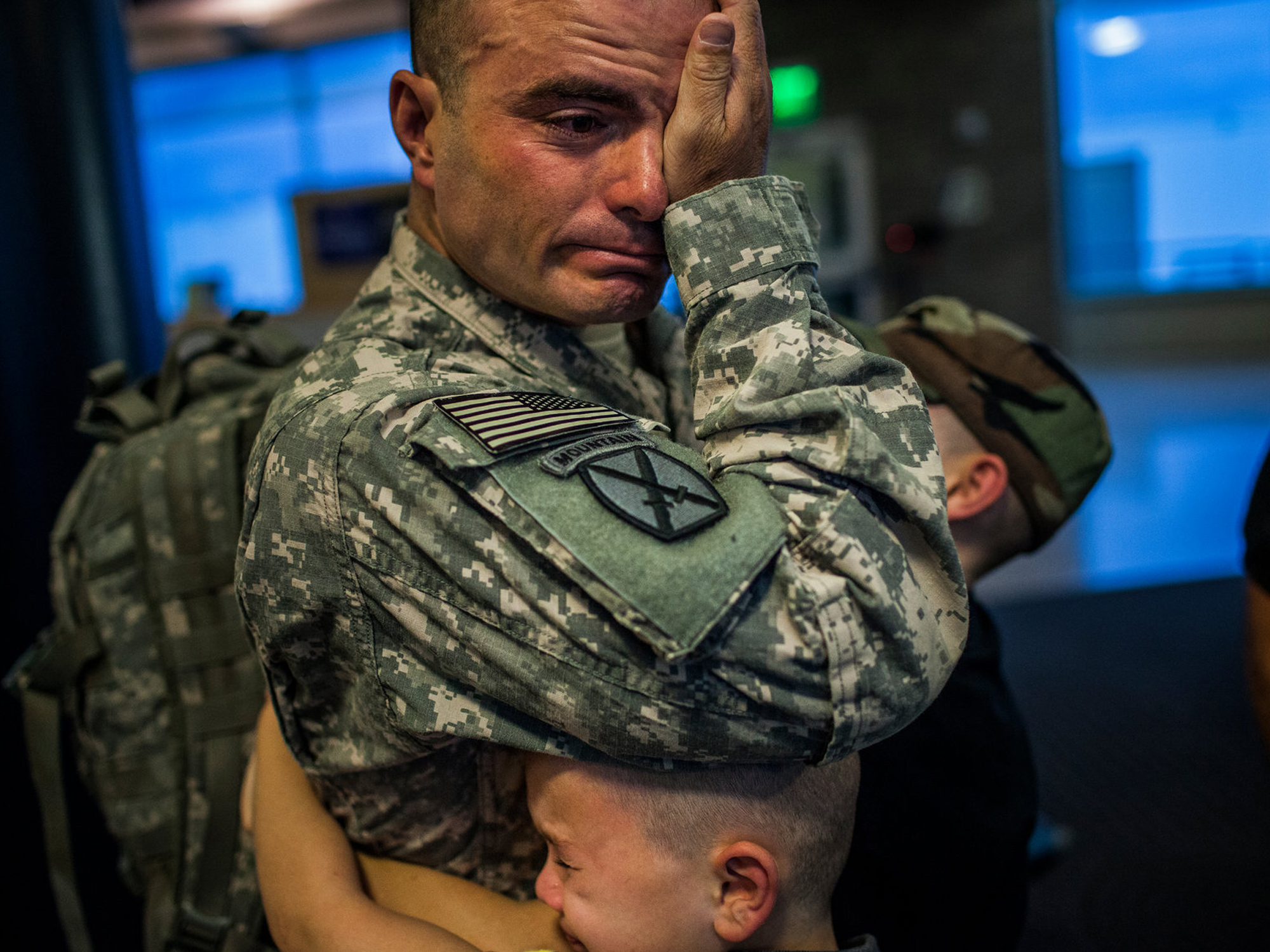 There’s a corollary to Truffaut’s old adage about no war movie being able to depict the hell of battle without inadvertently glorifying it; no film about what awaits soldiers at home can depict the proud nobility of their service without exposing the screaming hellacious torment that undergirds it.

Leslye Davis and Catrin Einhorn’s feature debut Father Soldier Son is an odd documentary specimen: an attempt to make a stanceless, apolitical portrait of the modern-day veteran. There’s nothing in here that runs the risk of feather-ruffling to either side of the aisle, a lack of substance disguising itself in a humanist perspective. We’re here to focus on Sgt. First Class Brian Eisch and his assorted tribulations, the filmmakers’ elisions suggest, not to consider any of the factors that have brought him and countless others like him to this juncture. In taking great interest in symptoms and zero interest in their causes, they weaken their thesis about intergenerational patterns of destructive masculinity.

The film covers one decade in the life of Eisch and his family, a period of time beginning with his deployment to Afghanistan and an in-the-field injury that sends him home for good. He tries to tough it out, in keeping with his man-up-and-muscle-through approach to every facet of life, but eventually he accepts that amputation is the only option. From there, it’s all downhill as he loses personal agency and gains weight, his upbeat disposition giving way to irritability and impatience. He spends all his time playing first-person shooter video games, sinks into depression, and snaps at things that never bothered him before.

Around him, everything moves onward. He gains a wife and a prosthesis, and loses something of great value best left undisclosed here. His relationship to his two sons, teen Isaac and rambunctious grade-schooler Joey, illustrates the most pointed comment the directors have to make. He perpetuates toxic paradigms of manliness to his boys, the same emotional stuntedness that keeps him dedicated to an institution that has effectively ruined his life.

He screams at little Joey to bear down and win during a peewee wrestling match, and later on, the kid discusses a chilling desire to go overseas and kill the men who hurt his father like it’s one of TV’s darnedest things. Older Isaac wants to make something out of himself and go to college like his father never did. Dad bets him $400 he won’t make it to graduation day, and that he’ll sign recruitment papers within a year.

When he’s ultimately proven right and Isaac succumbs to the lack of opportunity afforded him in his rural corner of upstate New York, the film doesn’t treat the young man’s enlistment as a horrifying culmination of hopelessness. The military unveiling ceremony for new recruits looks like an Imagine Dragons music video, and the directors go right along with the faint sense of patriotism. The film inspires tremendous empathy for the many challenges facing Eisch, from the physical obstacles with his leg to the inability to connect to civilians at home, but nothing suggests that the Army may be at fault for the sorry state of affairs.

A visit to the VA center goes too smoothly, with edits hustling through the military getting Eisch all taken care of. The questionable validity and utility of the war on terror go unremarked upon, save one soundbite in which Eisch remarks that he doesn’t think much about that beyond the age-old clash between the good guys (us, presumably) and the bad guys (them). The edits skate right over the 2016 election, presumably because a wide swath of viewers would lose a lot of sympathy for this man if we heard his opinions about Trump.

The summation of Eisch’s experiences feels glaringly incomplete, even as it faithfully conveys the interiority of his struggle. Put simply, there’s no point in generating this much compassion for veterans if there’s no willingness to engage with the question of what’s to be done with it.