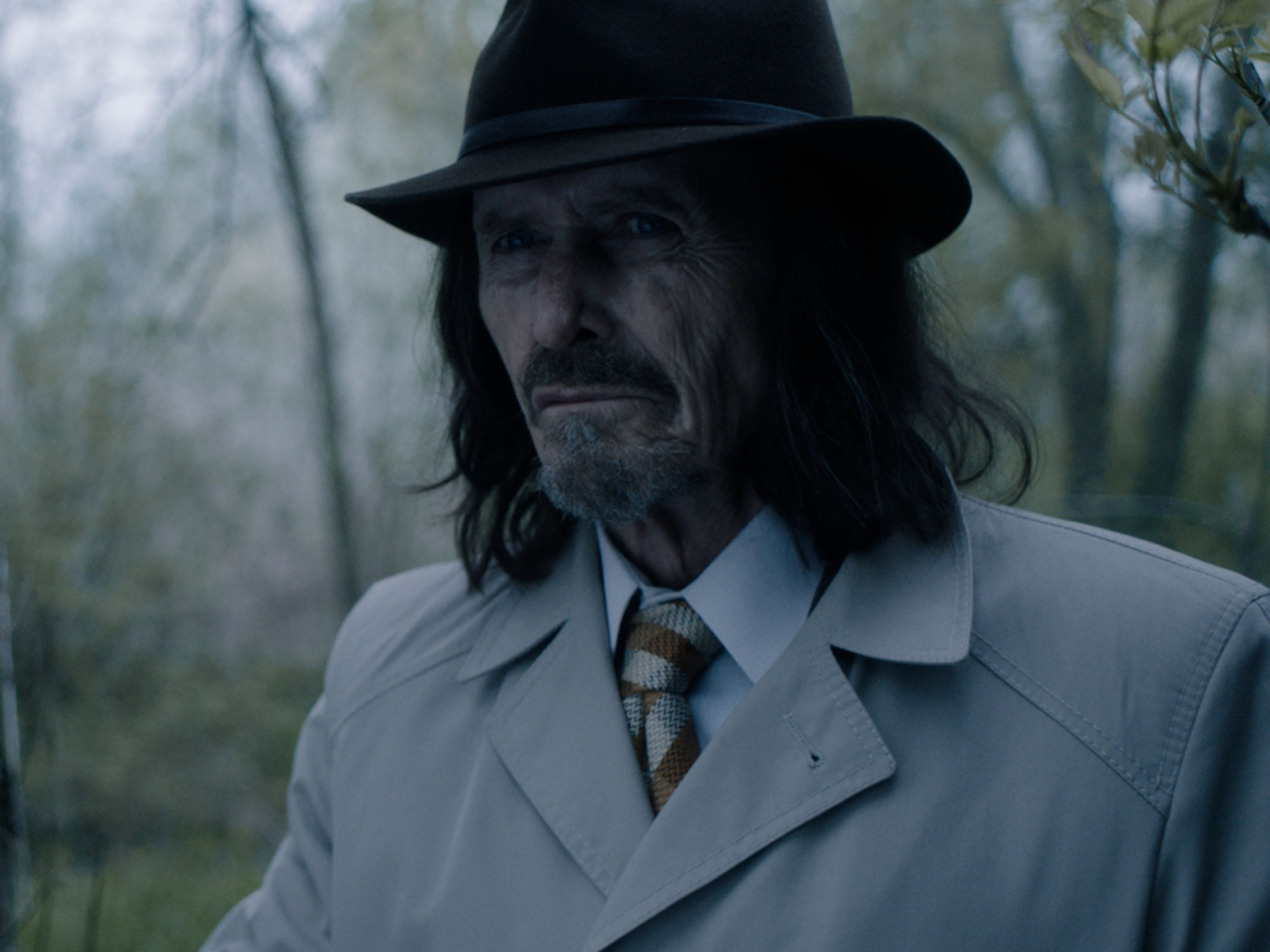 “We’re in a different world,” says a grizzled hitman (Stephen McHattie) of his surroundings near the end of Dreamland. He’s not wrong, and the clue is in the title. Bruce McDonald’s film plays out in a world that is at once recognisable and yet constructed from the artificial trappings of pure genre. A dreamworld, so to speak, built on a foundation of cinematic tropes.

The setting is an unnamed European city, where the hitman has been sent by his gangland boss Hercules (Henry Rollins) to remove the pinky from a ‘maestro’ trumpet player (also played by McHattie) whose sole offence was to forget narcissistic Hercules’ name. Yet in Dreamland, confusion over people’s names is a mindset with which the viewer will easily be able to Identity. After all, the maestro musician, a Chet Baker figure who mixes jazz mastery with a hard heroin habit, is never actually named in the film. And the hitman who briefly pursues him, though repeatedly asked for his own name, reveals it only in the film’s final scene.

“You have to understand one thing,” the hitman tells the young boy Dario (Morgan Csarno-Peklar), after agreeing to help rescue his 14-year-old sister Olivia (Thémis Pauwels) from child prostitution and sex trafficking. “We start out a bunch of people, but we end up as one.” On one level, the conflicted hitman is alluding to transformational moral decisions he has just made – to spare the maestro, to save the girl – bridge-burning, life-altering decisions which will set the hitman on a path against his former employer Hercules, while cementing his own character.

On another level, though, these words point to the way these two very different people – the musician and the killer – slowly circle and merge into each another until they end up as different representations of the one multi-faceted character. After all, both are professional artists struggling for integrity in a degraded world of compromise and corruption.

Both serve masters – respectively the thuggish Hercules and the unscrupulous Countess (Juliette Lewis) – whose decadent makeup demeans everyone around them. Both seem at times to experience extra-sensory perceptions of what the other is doing elsewhere (“he can be in two places at once,” as Hercules says of the maestro), as though they are intimately, impossibly connected.

Both even, like actual identical twins, share a certain peculiar physical attribute. And both are played by the same actor, McHattie, whose presence in these dual rôles (sometimes in the one scene) serves as a constant reminder that these two characters represent different sides of the same coin: a soul lost in an amoral limbo, hoping to find peace and somehow to remain himself in his passage to the other side.

That journey towards death is expressed through several genres, stitched surreally together: the neon-lit noir of Hercules’ club (called ‘Al Qaeda’) below, the Countess’ fairy tale castle above, the Kafka-esque labyrinth of streets in between. There is even, amid all the contract killings, child gangs, criminal undertakings and climactic shoot ’em up, a bizarre element of Gothic, as the Countess’ brother (Tómas Lemarquis) – a literal vampire – seeks to marry Olivia for her virgin blood.

It is just one of several ways in which the film tells a story of children falling victim to adult predation, alongside Hercules’ pimping of young girls, and the Countess’ readiness to make children available for the pleasure of her party guests. It is as though McDonald’s film starts out a bunch of stories, and ends up as one. Only the names have been changed.

The last time director Bruce McDonald teamed up with writer Tony Burgess was for Pontypool, an ingenious and sophisticated horror film in which the vector for a zombifying virus is language itself. Freely adapting from his own ‘unfilmable’ 1995 novel ‘Pontypool Changes Everything’, Burgess confined Pontypool’s events to the vantage of a snowed-in radio studio where shock jock Grant Mazzie (McHattie) and his producer Sydney Briar (played by McHattie’s then wife Lisa Houle) slowly realise that Mazzie’s irony-tinged, free-associative on-air patter may be as much cause as cure of the evolving apocalypse.

A surreal coda sees the pair, now renamed ‘Johnny Deadeyes’ and ‘Lisa the Killer’ and dressed as characters from genre pictures, attempting to escape the infectiousness of normative language and thought by reinventing the studio space around them as “a new place that isn’t even there yet.” For years, there have been rumours that McDonald and Burgess’ film would be the first in a Pontypool trilogy (to be followed by Pontypool Changes and Pontypool Changes Everything).

But in the meantime, Dreamland serves as a sort-of side-quel, branching out from the coda to Pontypool, as the hitman (whose late-revealed name you can probably guess) is living out an escapist genre fantasy, occasionally partnered up with Lisa (Houle again), who now works at Al Qaeda.

If Dreamland concerns itself with bad people ‘breaking good’, and shows the hitman and Lisa working together to save a victim of child abuse and exploitation, this redeems not just the hitman, but also his other double, the DJ Mazzie, who in Burgess’ original novel, if not in the 2008 film, was himself a paedophile – and who here seems to be struggling to divest himself of that guilt, and to wash away the blood on his hands, before he can finally rest in peace. The result is a truly strange film.

For while its hard-boiled escapades can be watched and enjoyed even by those who know nothing about Pontypool, Dreamland offers the nichest (but also richest) of pleasures to the already niche audience of those who know and love McDonald and Burgess’ previous collaboration, whose characters and events it reconfigures and translates into entirely different cinematic idioms.