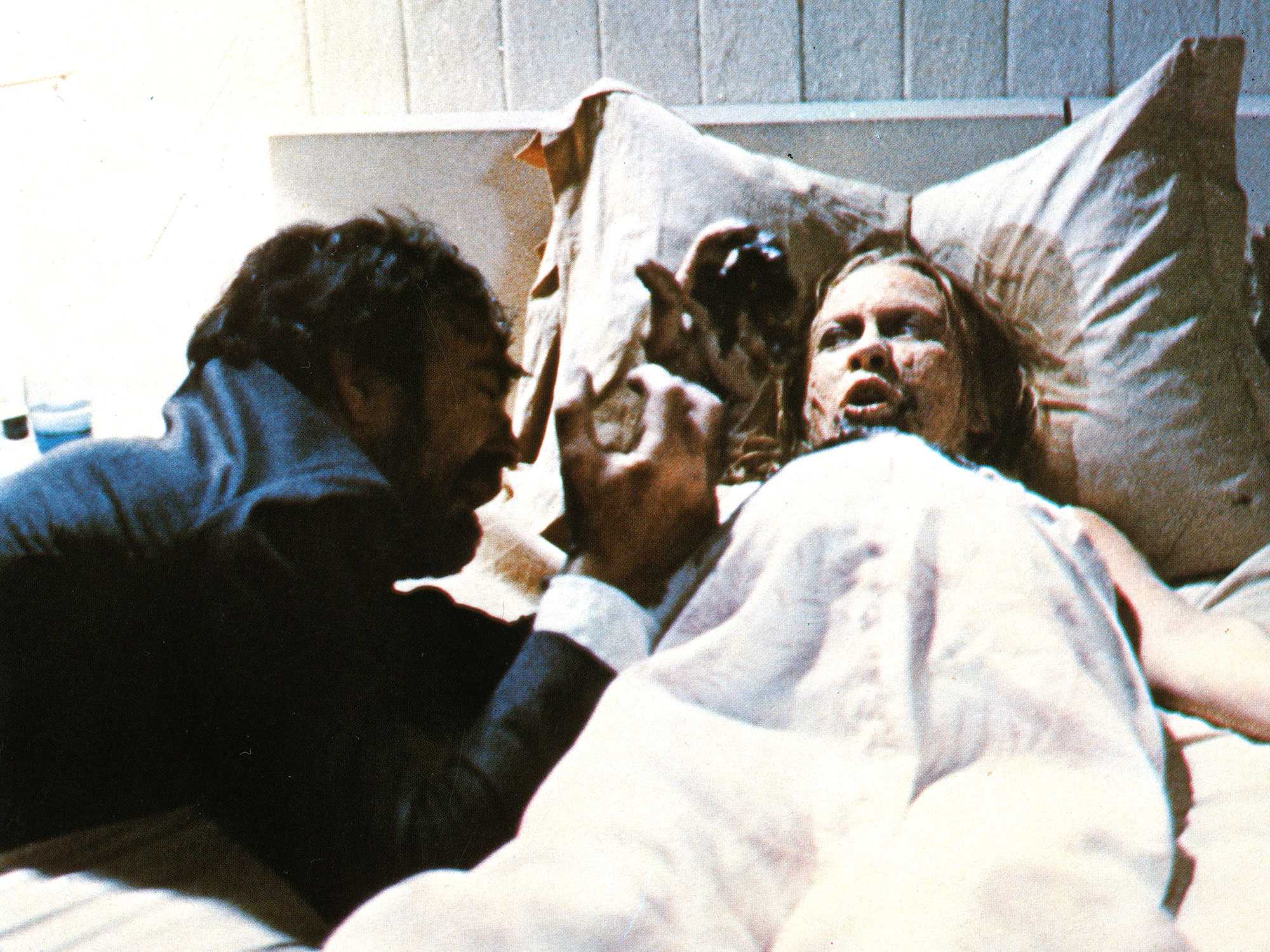 “Evil cannot create, it can only repeat,” says Dimitri (Richard Johnson) near the end of Ovido G Assonitis and Robert Barrett’s Beyond the Door, aka The Devil Within Her. Dimitri is a haunting presence in the film right from the opening sequence in which we see, or rather hear, him being scolded by the Devil (voiced in a clipped English accent by an unseen Edward L Montoro) for letting a woman, Jessica (Juliet Mills), “get away”.

The Devil punishes Dimitri for this rather abstract transgression by making his red car go crashing over a cliff, but then freezes the vehicle in mid-air, and offers Dimitri an irrational last-second deal: “You must find a house, a woman, that woman, you must find the child she is carrying in her womb, you must find me… You only have a few days in which to succeed or fail.”

It is not just the car but time itself which is in suspense here. For despite Dimitri’s expressly tight deadline, it will be actual years before he catches up with his ex Jessica again – enough years for Jessica to have in the meantime married Robert Barrett (Gabriele Lavia) and had with him two children, Gail (Barbara Fiorini) and Ken (David Colin Jr).

They are a thoroughly modern San Francisco family: sound engineer Robert has just cut a single entitled Bargain With The Devil; Jessica is on the pill; and the constant swearing of their two ‘monsters’ could make a sailor blush, with precocious Gail talking like an adult hipster (“If you don’t quit crying you’re going to have a really bad trip”) while reading multiple copies of Erich Segal’s novel Love Story, and her younger, appetitive brother “sucking in cans of pea soup all day.”

This is a secularised clan living in a godless age, and when Jessica discovers that she is, despite all the prophylactic measures that she has taken, pregnant with child, the invisible devil, it seems, has found a back door through which to reemerge for some sadistic fun and games that will tear the family apart.

The bizarre detail of ‘pea soup’ is an important self-conscious touch here. For soon afterwards Jessica, filled with foetus and possessed by the Devil, will be copiously vomiting green viscid pea soup of her own, much as Linda Blair’s Regan MacNeil had famously done the previous year in William Friedkin’s blockbusting possession horror The Exorcist.

Indeed, although Assonitis was probably better known for his long career producing B-movies, as a director he had made something of a specialty of the quickie horror ripoff, with his Tentacles (Tentacoli, 1977) cashing in on the recent fame of Steven Spielberg’s Jaws, while Piranha II: The Spawning, on which he was uncredited co-director to a debuting James Cameron, stole equally from Jaws and Joe Dante’s Piranha.

So perhaps it might be supposed that Assonitis’ horror filmography, like evil, “cannot create, it can only repeat”. Certainly Warner Bros regarded Beyond The Door to be similar enough to their hot property The Exorcist to sue for copyright infringement, ultimately winning a settlement (including a portion of future profits) from the film’s Italian production company.

Yet although Beyond The Door may feature a bed-bound woman spewing green liquid, speaking in multiple voices, levitating into the air, and even at one point revolving her head 180 degrees, in fact its differences from The Exorcist are much more striking than its similarities. Here the Devil’s target is not a girl on the cusp of adolescence, but a worldly mother of two (with a third on the way). Here there is possession, but no priestly intervention, or even priest, and not the barest hint of exorcism either.

While Friedkin’s film was designed to scare audiences back into church, Assonitis’ seems entirely uninterested in the rituals and structures of organised religion. The Devil insinuates himself invisibly into a world without faith, waging a two-day battle of wits and will with the bearded Dimitri – who may be Jesus, or may be God, or may just be, you know, Dimitri. In fact, the film is not a million miles from that strange collision of the thoroughly contemporary and the abstractly cosmic to be found in Michael J Paradise’s later The Visitor, which Assonitis produced and helped write.

So Beyond The Door is too odd, too indefinable, too singular, to be dismissed as merely derivative. Here the devil is in the details – and anyone who imagines that what is going on in the film is in any way straightforward should try to rationalise to themselves in a simple sentence or two just how exactly its beginning, middle and end fit together. It is not that the film is incoherent, exactly, but rather that its narrative connections are more suggested than stated, and more metaphorical, perhaps even metaphysical, than direct and literal, as eternal evil keeps mirroring and repeating itself ad nauseam.

Beyond The Door is available in a Limited-Edition Blu-ray, remastered in brand new 2K restoration of the extended Uncut English Export Version, with bonus disc of alternate US Theatrical Version and feature-length documentary Italy Possessed, on 30 March.

The post Discover this bizarre B-movie riff on The Exorcist appeared first on Little White Lies.