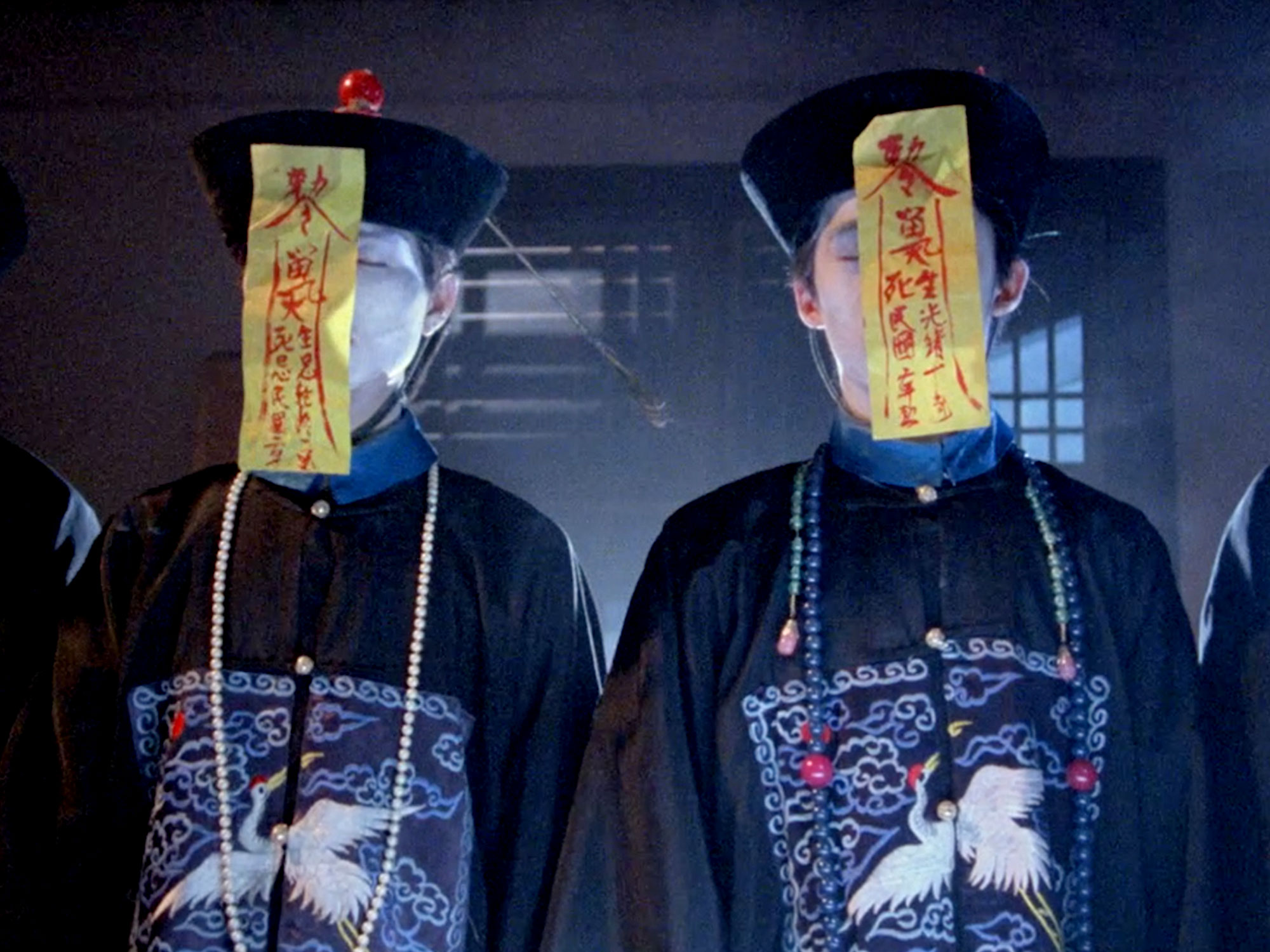 There is a scene some way into Ricky Lau’s Mr Vampire where Taoist priest Master Kau (Lam Ching-ying) is invited to a “Western tea” by the wealthy businessman Master Yam (Huang Ha). Unfamiliar with Western practices, Kau decides to bring his foolish apprentice Man-choi (Ricky Hui) along, hoping that Man-choi’s ignorance will distract from his own.

The teahouse scene is a comedy of errors. Unable to read the English-language menu, both men choose ‘coffee’ after they hear Yam’s sophisticated daughter Ting-ting (Moon Lee) order the same – but then they are not sure which of the black beverage or the accompanying white liquid is the actual coffee, or how to drink either. When served “custard pies, flown in straight from England”, Kau and Man-choi cover the delicacies – which they imagine are savoury – in cream and sugar.

This whole comic sequence depends for its laughs on the sort of cross-cultural clashes and misunderstandings which are in fact woven into the very texture of Lau’s film. For much as the priest and his student must contend, hilariously, with another nation’s conventions for which they are entirely ill equipped, the viewer, too, will be bewildered by Lau’s crazy pick-and-mix mismatch of transnational horror tropes.

The English title may promise vampires, but really these are jiāngshī, reanimated corpses from Chinese folklore. They move about with a distinctive hopping motion, and are, despite their stiffness, deft at kung fu. They cannot detect those who hold their breath. They can be deterred by mirrors, glutinous rice or thread stained in ink and blood, and they can be stopped dead in their tracks by a dab of blood or a bloody parchment placed on their foreheads. They are destroyed with fire as much as with stakes (and sometimes with both).

In the film, the jiāngshī is Master Yam’s late father, disinterred to have his grave moved to a location with better feng shui, but in fact never fully dead. For all Kau’s ignorance of British tea rituals, he is an expert when it comes to jiāngshī, and frequently watches over an incapacitated group of them ‘in-house’ with his friend Priest Four Eyes (Anthony Chan). So Kau immediately recognises that Yam’s father, with his perfectly preserved body, is a jiāngshī, and takes over his safekeeping.

Owing to the antics of Man-choi and his fellow student Chau-sang (Chin Siu-ho), however, the jiāngshī escapes his coffin, and goes on a feeding rampage. Kau is on the case, but he must also contend with Jade (Wong Siu-fung), a succubus-like spirit determined to sap the sexual energy of Chau-sang. Meanwhile clownish, craven local policeman Wai (Billy Lau) is more hindrance than help in bringing under control all these supernatural entities.

In another key scene in the film, everyone’s lives are endangered when a rice salesman adulterates his glutinous rice with the long grain variety (the latter, unlike the former, having no effect on jiāngshī). Mr Vampire itself, however, revels in such adulteration, mixing and matching with wild abandon scenes of knockabout comedy, wire-wrought martial arts, monster horror and wacky dancing.

The film may be named after a vampiric spirit, but it happily throws in for good measure a sexy ghost who can use her own disembodied head as a means of attack. While most of the paranormal activity comes with Eastern underpinnings, outside influences are also let in. The pair of holes that the jiāngshī leaves in his victims’ necks may in fact be caused by his long fingernails, but he and the film’s other jiāngshī still sport the iconic elongated fangs of a Western vampire and, in another nod to Western vampirology, pass on their condition to anyone whose qi, or life energy, they have absorbed.

When Man-choi and Ting-ting try to conceal themselves from the jiāngshī, their chosen hiding place – a closet with slatted doors – owes as much to the inspiration of John Carpenter’s Halloween as of anything from Chinese folklore.

Along with Sammo Hung’s Encounters of the Spooky Kind from 1980, Mr Vampire (produced by Hung) created a craze in Hong Kong for jiāngshī comedies, spawning a popular series of loose sequels, as well as other films featuring Lam Ching-ying as a monobrowed exorcist.

The gags here can be hit and miss, although native English speakers will find the “European dub”, crammed with absurdist meta jokes and a carnivalesque sense of anarchic fun, much more entertaining than either the rather staid and stuffy American dub or the subtitles accompanying the original Cantonese version.

Mr Vampire is available on Blu-ray in a new 2K restoration from Eureka! Home Video on 20 July