Welcome to Saturday Morning Cartoons, our new weekly column where we continue the animated boob tube ritual of yesteryear. Our lives may no longer be scheduled around small screen programming, but that doesn’t mean we should forget the necessary sanctuary of Saturday ‘toons.

In 1923, Walt Disney and his brother Roy O. Disney formed the Disney Brothers Cartoon Studio in Los Angeles after Walt’s first project Alice’s Wonderland, featuring a live-action girl roaming through an animated world, bankrupted the brother back in Kansas City, Missouri. Refusing to let a little financial catastrophe rob them of a rich future, the two brothers continued to crank out fifty-six sequels in the Alice Comedies series.

Their next project, Oswald the Lucky Rabbit, was made in partnership with Universal Pictures and producer Margaret J. Winkler. The character was a sensation, but after a year together, Winkler’s new husband, Charles Mintz, insisted that Walt Disney take a smaller advance for each short. Walt said nuts to that and worked in secret on the first two Mickey Mouse films (Plane Crazy and The Galloping Gaucho) while still under contract with Winkler.

Mickey Mouse’s first two escapades are not streaming on Disney+. However, there are dozens upon dozens of other shorts available to those wishing to explore the early days of Walt and Roy’s grand venture. Yes, there is Steamboat Willie, Mickey’s third cartoon, and first foray into sound, but the real pleasures occur in the less obvious selections and necessitate a little extra navigational curation.

What you will find below are my five (currently) favorite short films accessible through Disney+. They range from the historically significant to technologically important to downright good times at the movies. These films are a starter kit. Once you initiate a relationship with them, you’ll spend the rest of your weekend click-clacking your way into a sumptuous cartoon stupor. Enjoy! Enter Donald Duck, but he’s not quite the duck you know. The first appearance of our favorite little sailor varies slightly from the form he would eventually take. His feathers and beak are the same, as is his unintelligible speech, but his limbs are elongated, his booty much plumper, and his feet are teeny-weeny.  Most importantly, though, Donald is as aimless, frustrated, and unproductive as ever.

The titular hen is eager for help regarding her crop of corn. Winter is coming, and she needs to get her seeds in the ground and watered before disaster strikes. Donald Duck and Peter Pig refuse to lend a hand, claiming painful bellyaches. Only when offered food, do the two dopes spring to life, but the Wise Little Hen fills their baskets with castor oil rather than the delicious fruits of her labor.

Walt Disney knew there was great potential in Donald. A month before the release of The Wise Little Hen on June 9th (now officially considered Donald Duck’s birthday), Disney released the first illustration of the character in the pages of Good Housekeeping. In August of the same year, Donald became the proper foil to Mickey Mouse in Orphan’s Benefit. From that point forward, the duck was a household name. Lonesome Ghosts arrived in theaters three days after the release of Snow White and the Seven Dwarfs. Featuring Mickey Mouse, Donald Duck, and Goofy as the Ajax Ghost Exterminators, the cartoon is often cited as a significant inspiration for Ivan Reitman’s Ghostbusters with Goofy’s “I ain’t scared of no ghost” possibly serving as the springboard for Ray Parker Jr.’s theme song. Looking at the short itself, sure, that’s possible.

The three intrepid adventures are hired to free an old dark house of four meddlesome ghosts. That’s their business, so they must have experience in these matters, but based on how this particular extermination goes, it must be their first time dealing with genuine wraiths. These specters make quick work out of our trilogy of dunces.

The twist on the story is that the Ajax gang was hired by the ghosts themselves, who have become extremely bored over many lonely years. No one with any common sense would dare cross their threshold, but these exterminators of free of any such burdensome wit. The joys of whenever Mickey, Donald, and Goofy paired together stem from their inability to accomplish anything in a direct fashion. They always triumph, but usually as an accident. Lonesome Ghosts is a quintessential representation of their special brand of victory. The Old Mill does not look or feel like any other cartoon from this early era at Disney. Directed by Wilfred Jackson, the animator and composer responsible for the “Night on Bald Mountain” sequence in Fantasia, The Old Mill succeeds in depicting a realistic relationship between various animal life and a creaky, abandoned windmill during a torrential thunderstorm. As Walt Disney would often demand, the short was an excuse to push technological boundaries.

Snow White and the Seven Dwarfs used an earlier version of the multiplane camera (when the Evil Queen chugs her potion and the background whirls around her), but The Old Mill was the first project to be shot entirely using this invention. The camera requires the artwork to be painted on transparent sheets of glass and layered atop each other. Shooting these pieces at various speeds and distances creates the illusion of depth. The technique was the standard operating procedure until The Little Mermaid wrapped in 1989 when the traditional multiplane camera became obsolete after the digital version’s creation. 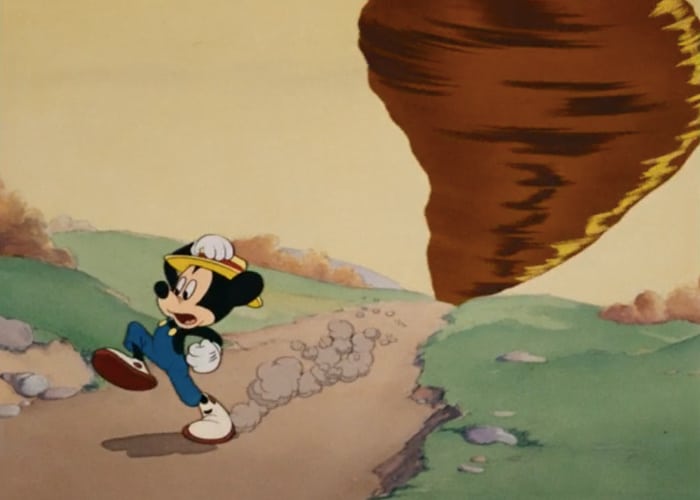 While The Little Whirlwind is the 110th Mickey Mouse short, in many ways, it’s his first appearance. Released on February 14th, the one-reel film introduced the world to a brand-spanking-new design for Mickey. Gone were the stiff, perfectly circular ears, replaced by a pair that actually worked in perspective. The new design also removed his tail, slimmed his body, bulked up his head, hands, and feet…and gave him buck teeth.

Huh. Well, the new Mickey only lasted throughout World War II (and the buck teeth remained for merely three more short films). The ears were returned to circular orbs, ditching perspective, so that his face would be instantly recognizable no matter what the angle. One does not mess with the trademark.

The premise of the film is quite simple. Mickey tends to Minnie’s garden while she’s busy baking a cake in the kitchen. The task should be simple and garner good favor, but a tiny whirlwind roams into the yard and refuses to leave. No matter what Mickey does, the rascally wind destroys his progress. Eventually, Mickey chases the whirlwind from Minnie’s property but encounters the whirlwind’s mighty mother instead.

The final minutes of animation are stunning to behold, somehow toppling the iconic tornado imagery of The Wizard of Oz from just a few years earlier. Oh, you’re like, “Come On, Brad. Hyperbole much?” Yeah, yeah, yeah, fine, but watch the short first and remember that animation merely demands imagination to achieve the physically unachievable. The Little Whirlwind is not gunning for epic dread. Instead, this massive beast of air is here to decimate Mickey’s fragile ego, and its conquest is magnificent. Lend a Paw is an update to the 1933 short, Mickey’s Pal Pluto. The two films are almost identical narratively and conceptually. After Mickey and Minnie adopt a darling and adorable kitten, Pluto succumbs to righteous jealously, allowing the little devil inside to persuade him to commit violent acts against the cuddly interloper. Luckily, Pluto also has an angelic side that fights the demon and encourages the dog to consider the value of kitten friendship.

With advancements in animation and camera technologies, Walt Disney was not satisfied with the original cartoon. The ideas were there, but the execution could be improved. Before everyone could own the originals on home video, such bravado was not the blasphemous act many consider it today. Lend A Paw was not Disney’s first remake, and as you most definitely know and may loath, nor was it his last.