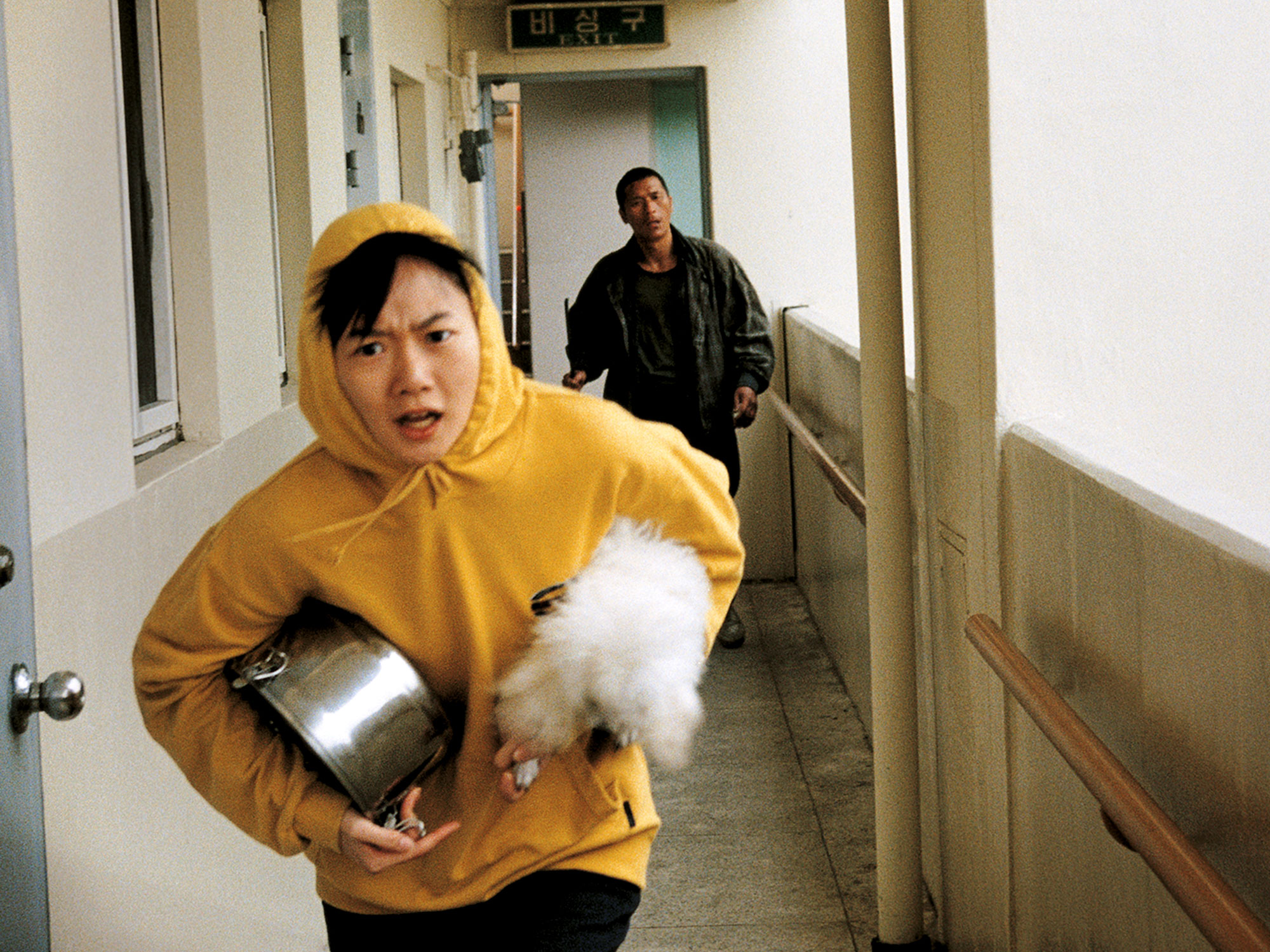 “What a nice day!” says Ko Yoon-ju (Lee Sung-jae), looking out his apartment window at the beginning of Barking Dogs Never Bite. “I’d like to go hiking and take a nap on the mountain.” A lazy, broke humanities grad overlooked for tenure, and a husband henpecked by his working, pregnant wife Eun-sil (Kim Ho-jung), Yoon-ju just wants a quiet life.

The endless yapping of another tenant’s dog, however, is driving him crazy, and so he makes various half-hearted attempts to kill it, before finally locking away the still living dog that he has stolen in a closet on the building’s lower level, at first unaware – in a precursor to the plotting of Parasite – that there are others secretly frequenting this basement with their own designs on dogs.

The Korean title of Bong Joon-ho’s debut feature, Peullandaseu-ui Gae, translates literally as ‘Dog of Flanders’, in allusion to Marie Louise de la Ramée’s 1872 novel. The reference is ironic, for while ‘A Dog of Flanders’, hugely popular and influential across Asia where it is regarded as a children’s classic, tells a sentimental tale of an orphaned boy and his adopted pet, you will be hard pressed to find any sentiment in Bong’s gleefully misanthropic view of a residential community that is also a microcosm of Korean society.

“No animals were harmed in the making of this film,” reads the text that opens Barking Dogs Don’t Bite, but sensitive cynophiles should be warned that several dogs are abducted, imprisoned, killed, even butchered over the course of the film, as Bong takes the moral measure of his human characters by showing how they relate to their animal neighbours. 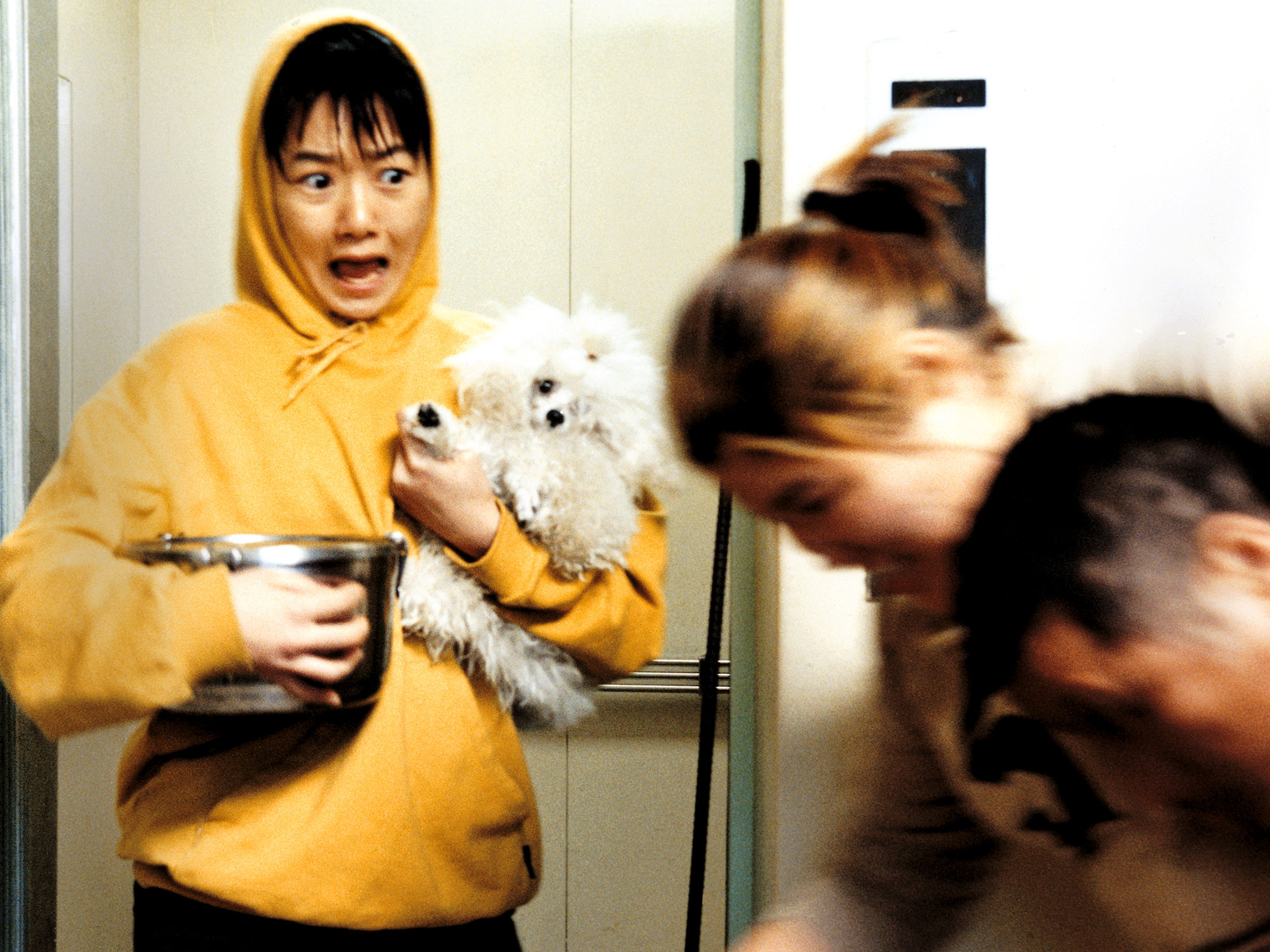 “Dogs eat better than I do,” complains the building’s old janitor (Byun Hee-bong), who himself eats other people’s dogs. “Nobody in this country follows the rules,” complains Yoon-ju,, who will himself use a bribe to gain an academic post. Yoon-ju’s pursuit of the professorship, and Hyun-nam’s pursuit of fame, are really the same phenomenon – an endless race to reach the top in a dog-eat-dog system where cheating rules all and winning is never fair.

Their ambitions may seem very different, but Bong suggests a strange symmetry, even an interchangeability or perhaps reversibility, between these characters, as the man who steals and kills dogs becomes the man who owns one and who, swapping the red colour of his clothes for the yellow of Hyun-nam’s, joins forces with her to try and find his own dog before somebody else can kill it.

Much as the building is haunted both by “Boiler Kim”, who the old janitor says ended up dead and buried within the basement’s walls after seeing through the builders’ corruption and corner-cutting, and by the homeless man (Kim Roi-ha) who drifts unnoticed through its interiors, this film’s very structure both conceals and reveals capitalism’s steep downside.

If it is Yoon-ju who in the opening scene expresses his desire to hike in the mountains, it is Hyun-nam whom we shall see doing just that in the film’s closing sequence. This may well be the only sort of climbing for which she is destined. In this film, bad, even psychotic behaviour is rewarded, while people like Hyun-nam receive little more than than dried radish for their good deeds and decency, and lose everything else.

Despite its English title, Barking Dogs Never Bite is a mordant affair, presenting itself as wryly funny in its observations of human foibles, while in fact exposing the cruel underbelly of ‘modern behaviourism’, and – literally, in its final image – holding up an accusatory mirror to us viewers who are part of this iniquitous society.