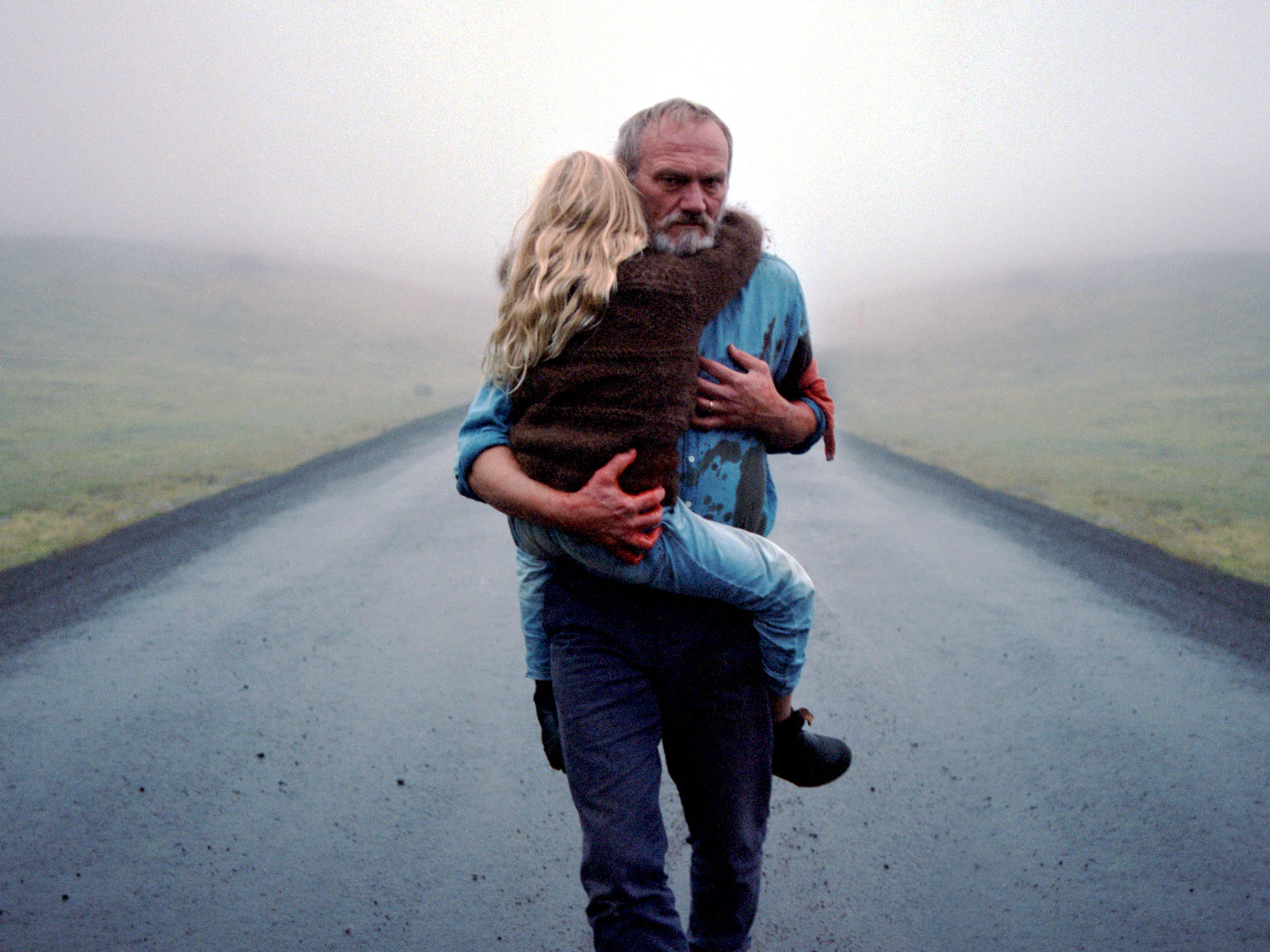 People react to bereavement in different ways. In the wilds of Iceland, a gruff middle-aged policeman takes time off work to grieve for his wife, who died when her car went off-road in foggy conditions. Ingimundur, played by esteemed Icelandic actor Ingvar Sigurdsson, is the sort of furrowed-brow, grey-haired, old-school type who doesn’t put his emotions on display.

Instead, he throws himself into renovating an isolated property to make it habitable for his granddaughter. The film’s title, we’re informed in an opening caption, refers to the sort of day, ‘Where you can no longer tell the difference between the earth and the sky,’ hence the dead can talk to the living. If that suggests some sort of supernatural communion, the story which subsequently unfolds is about an acceptance of reality – however bitter it might be – as a first step towards moving on.

What’s remarkable about Hlynur Pálmason’s drama is the way its elemental settings lend everything an oneiric quality. Yet the scenes play out with a very real, visceral intensity, especially once Ingimundur uncovers an uncomfortable secret about his marriage and seeks an outlet for his anger. In this rugged landscape, there’s one route in and out, so the road acquires a kind of mythic status, especially since the crash site is maintained as a memorial – and there’s a tunnel through a mountain, which becomes a weighty metaphor for all the troubles bearing down on the protagonist.

Trouble is, in Sigurdsson’s fierce performance, the bear-with-a-sore-head approach to everything doesn’t appear to be getting him anywhere, bringing bracing conflict with his former colleagues at the police station, frightening his grandchild to a distressing degree, and targeting his ire towards a male acquaintance of his wife through her teaching job. The mayhem unfolds in some remarkable unbroken takes, yet Pálmason and Sigurdsson never lose sight of the healing that’s taking place behind the glowering looks and gun-toting aggression.

The film’s grip tightens relentlessly, displaying Pálmason’s rapidly developing confidence, after a first feature, (2017’s Winter Brothers), which managed to hypnotically capture the processes of underground mining, but framed them with a saga of fraternal tensions which didn’t engage to the same degree. Here, we grasp early on through Ingimundur’s tender deportment towards granddaughter Saika (utterly believable child actor Ída Mekkin Hlynsdottir), that goodness is certainly within him, yet his errant behaviour intensifies the situation, coming closer to a point of no return, unless he can somehow get through the barrier of his own rage and resentment.

Which brings us to Pálmason’s pièce de résistance, a climactic music cue which is as unexpected as it’s effective in fixing the turbulent feelings of the moment. It’s credible in being from a record that Ingimundur might conceivably own, but it also expresses a make-or-break emotional blow-out with such precision that the effect is truly jaw-dropping. To know more, you’ll have to experience it for yourself. But then you do really need to see this marvellously conceived and sustained slice of life, which achieves an austere Beckettian affirmation of the fulfilment of keeping on, even in the most personally daunting of circumstances.

A White, White Day is available to watch from 2 July via Peccadillo Pictures.