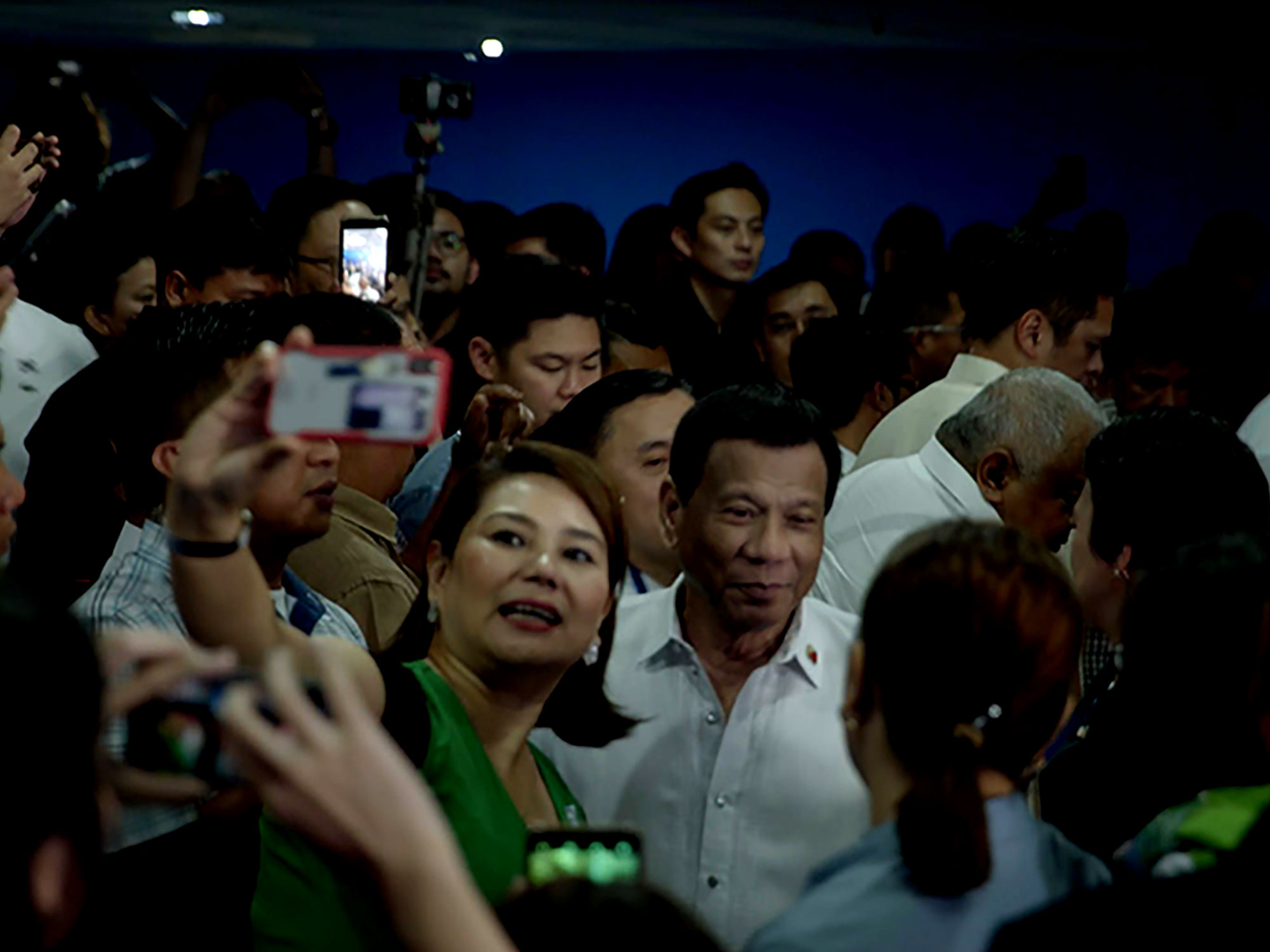 What should a journalist do when a nation’s president lies? It’s a question that has troubled Filipina journalist Maria Ressa for over a decade. Ressa is the executive editor of Rappler, the country’s most prominent and progressive independent news source, and a fierce critic of President Rodrigo Duterte, whose populist and authoritarian policies have earned him sharp comparisons to Donald Trump.

Duterte has championed the death penalty, backed the reintroduction of martial law, and exhibited unrelenting misogyny. On 3 July he signed the Anti-Terror Bill into law, setting into motion a policy that grants the state power to judge government critics as terrorists, and to conduct warrantless arrests.

The bill, which equates critical art, writing, and activism, as ‘terrorist activities,’ has already muffled the voices of filmmakers and journalists. Two weeks earlier, on 15 June, Ressa was convicted of ‘cyberlibel’ for a news article she had no involvement in. Further, the decision was made through a law applied retroactively, one that didn’t exist when the ‘libellous’ article was written, applied retroactively. The culmination of years of political harassment and arrests, this ruling means that Ressa may face up to 63 years in prison. “The worst part of it all is the administration’s denial that this verdict isn’t political,” Ressa said in a recent press conference over Zoom.

Ressa is the protagonist – the “centre of gravity,” as filmmaker Ramona S Diaz puts it – of the upcoming documentary A Thousand Cuts. Directed and produced by Diaz, the film premiered at this year’s Sundance Film Festival and streamed for 24 hours in the Philippines to shine a light on Ressa’s case.

With dimly-lit shots of winding alleyway crime scenes in Manila, the flickering fluorescents of a bustling newsroom, and startling archive footage of Duterte and Ressa sat inches from each other in an ideological battle, A Thousand Cuts documents the cat-and-mouse relationship between the state and the press that covers it (“Tell me where is [sic] our lies, and I’ll tell you where are yours [sic],” Duterte tells Rappler reporters in an early shot of the film). The film also probes the rise of fascism in a country colonised twice in its history, and serves as a testament to the strength and precariousness of Ressa’s crusade for press freedom, and towards what she calls a “just information ecosystem”.

The primary thread of Ressa’s story unravels alongside a carousel of related figures each fighting their own battles. We witness Rappler’s coverage of the 2019 Senatorial Elections, and Diaz spotlights two candidates: Muslim feminist Samira Gutoc, who is outspoken against Duterte. In Gutoc’s opposition is former National Police Chief, and one of Duterte’s main henchmen, Ronald dela Rosa. As election season drags on, we meet Pia Ranada, a Rappler reporter assigned to cover the Duterte administration, and notably banned from the Presidential palace by Duterte for being “too annoying”.

“The reason we gave Ramona and her team access to film is because we don’t know what’s going to happen, and we wanted someone to document it,” Ressa says. “Rappler can’t do that, because we’re the target.” Ressa also notes that 70,000 people have been arrested in July alone for social media posts. “The anti-terror law cements [that] the government controls the narrative, journalists are called communists, and ad-hoc abuses of power are codified into law.” On the Anti-Terror Bill affecting Filipino film culture, Diaz observes, “There is fear and self-censorship now, which is the worst. Filmmakers are stopping themselves from doing things.”

A Thousand Cuts is not only a moving profile of a figure willing to risk it all in the name of a greater truth, it’s also salient proof of the media’s material power. “Where’s the silver lining?” Ressa concludes. “I look at the young reporters who know in their heart of hearts that this law is wrong. It is not enough. We are going to have to report as if there is no Damocles sword, as if there is no threat… or we may very well lose our democracy.”

A Thousand Cuts opens virtually in US on 7 August, and international deals are being negotiated. Get updates here.

The post A new documentary shows a journalist risking it all for a greater truth appeared first on Little White Lies.